For Immediate Release
Office of the Press Secretary
August 13, 2008

THE PRESIDENT: Good morning. I've just met with my national security team to discuss the crisis in Georgia. I've spoken with President Saakashvili of Georgia, and President Sarkozy of France this morning. The United States strongly supports France's efforts, as President of the European Union, to broker an agreement that will end this conflict. 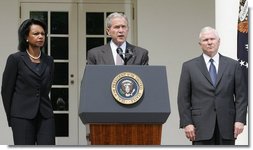 The United States of America stands with the democratically elected government of Georgia. We insist that the sovereignty and territorial integrity of Georgia be respected.

Russia has stated that changing the government of Georgia is not its goal. The United States and the world expect Russia to honor that commitment. Russia has also stated that it has halted military operations and agreed to a provisional cease-fire. Unfortunately, we're receiving reports of Russian actions that are inconsistent with these statements. We're concerned about reports that Russian units have taken up positions on the east side of the city of Gori, which allows them to block the East-West Highway, divide the country, and threaten the capital of Tbilisi.

We're concerned about reports that Russian forces have entered and taken positions in the port city of Poti, that Russian armored vehicles are blocking access to that port, and that Russia is blowing up Georgian vessels. We're concerned about reports that Georgian citizens of all ethnic origins are not being protected. All forces, including Russian forces, have an obligation to protect innocent civilians from attack.

With these concerns in mind, I have directed a series of steps to demonstrate our solidarity with the Georgian people and bring about a peaceful resolution to this conflict. I'm sending Secretary of State Condoleezza Rice to France, where she will confer with President Sarkozy. She will then travel to Tbilisi, where she will personally convey America's unwavering support for Georgia's democratic government. On this trip she will continue our efforts to rally the free world in the defense of a free Georgia.

I've also directed Secretary of Defense Bob Gates to begin a humanitarian mission to the people of Georgia, headed by the United States military. This mission will be vigorous and ongoing. A U.S. C-17 aircraft with humanitarian supplies is on its way. And in the days ahead we will use U.S. aircraft, as well as naval forces, to deliver humanitarian and medical supplies.

As I have made clear, Russia's ongoing action raise serious questions about its intentions in Georgia and the region. In recent years, Russia has sought to integrate into the diplomatic, political, economic, and security structures of the 21st century. The United States has supported those efforts. Now Russia is putting its aspirations at risk by taking actions in Georgia that are inconsistent with the principles of those institutions. To begin to repair the damage to its relations with the United States, Europe, and other nations, and to begin restoring its place in the world, Russia must keep its word and act to end this crisis.