For Immediate Release
Office of the Press Secretary
August 12, 2008

THE PRESIDENT: I want to thank members of the Coalition for Affordable American Energy for joining me today. We just had a very interesting and informative discussion. I heard from businesses, large and small. They -- these folks are representing a lot of workers, people who are really concerned about the energy situation here in America, a lot of people wondering why their government is not doing something about the supply of crude oil. 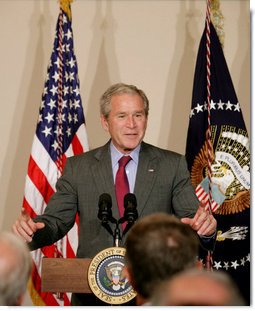 And one of the things the workers know that I fully understand, as well, I'd rather our consumers be buying gasoline made from oil here in America than gasoline from oil being made overseas. We want our dollars, to the extent possible, to be here at home, staying here at home.

Congress has restricted access to key parts of the Outer Continental Shelf since the early 1980s. Experts believe that these restricted areas could eventually produce nearly 10 years' worth of America's current oil production. People have analyzed what's possible there, and they believe that it's -- we can find a lot of oil, American-produced oil, oil that will mean our dollars are staying here and not going overseas. Advances in technology have made it possible to conduct oil exploration in the Outer Continental Shelf that is out of sight, that protects coral reefs and protects against oil spills.

Last month I acted and I lifted an executive branch restriction on offshore oil exploration. And then I called on Congress to join me and to lift the legislative ban -- to end the legislative ban. Unfortunately, the Democratic leadership in Congress decided to go on a five-week vacation, a recess, rather than act on behalf of the American consumer, the American small business owner.

Members have now had an opportunity to hear from their constituents, and if they listen carefully I think they'll hear what I heard today, and that is a lot of Americans from all walks of life wonder why we can't come together and get legislation necessary to end the ban on offshore drilling. And so today I join House Republicans in urging the Speaker of the House to schedule a vote on offshore oil exploration as soon as possible.

Now, the way ahead is this: The moratorium on offshore drilling is included in the provisions of the Interior appropriations bill. When Congress returns, they should immediately bring this bill to the House floor and schedule an up or down vote on whether to lift the moratorium on offshore drilling. Our goal should be to enact a law that reflects the will of the overwhelming majority of Americans who want to open up oil resources on the Outer Continental Shelf.

And so the Democratic leadership should bring up a clean bill, give the members a chance to vote up or down on whether or not we should proceed with offshore drilling, and not insert any legislative poison pills. Those would be provisions that they know will never be enacted and are added only for the purpose of killing the effort to open up the off -- the Outer Continental Shelf to drilling.

Congress can do some more. Once they solve this problem, they can allow us to drill in northern Alaska, which we can do in environmentally friendly ways. They should allow us to tap into the extraordinary potential of oil shale. And we need to expand our refining capacity here in America. These are all steps that the Congress can take to show the American people that we can move forward in a positive way to affect the price of gasoline. And there's a lot of members of Congress who want a up or down vote. And the Democratic leadership has got to listen to the people on this issue.

Now, this is part of a comprehensive strategy. Everybody in this room understands that expanding oil and gas production is a part of a comprehensive strategy. Obviously we need to expand conservation measures. We need to develop alternative energy technologies such as advanced batteries, plug-in hybrids, hydrogen fuel cells. We need to expand clean, safe, nuclear power; clean coal technology; solar and wind power. There's not a single answer to our energy problems. But a part of solving the dilemma that our consumers are facing, that the hardworking Americans face, and that is high price of gasoline, we need to get after exploration here in America. And we can do it in a way that protects the environment.

So when Congress comes back, they need to act. And they don't need to gimmick up the legislation; they need to allow there to be an up or down vote, and let the members express the will of their constituents.