For Immediate Release
Office of the Press Secretary
August 10, 2008

PREMIER WEN: (As translated.) Mr. President, welcome to Beijing. I also welcome your family members and other friends from the United States to the Beijing Olympic Games.

I was informed that yesterday you went to see the American athletes in Beijing and you also watched a match played by the U.S. women basketball team. You also spent some time with the beach volleyball players. (Laughter.) 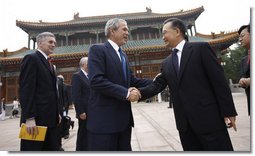 PREMIER WEN: I'm very happy that you're going to watch the match.

PRESIDENT BUSH: Yes, sir. I'm going with the Foreign Minister. (Laughter.) He's going -- he told me he's going to be yelling there at the top of his lungs. (Laughter.)

Thank you for your hospitality. It's been a wonderful experience being here. I didn't see if you were at the Opening Ceremonies.

PREMIER WEN: Yes, I was there.

PREMIER WEN: When the U.S. team marched into the stadium I saw that you put back your coat and your suit and then you stood up and cheered for your team.

PRESIDENT BUSH: Yes, sir. I was proud to see them. But I bet you did the same thing when the Chinese team came. (Laughter.)