For Immediate Release
Office of the Press Secretary
August 9, 2008

THE PRESIDENT: I'm deeply concerned about the situation in Georgia. The United States takes this matter very seriously.

The attacks are occurring in regions of Georgia far from the zone of conflict in South Ossetia. They mark a dangerous escalation in the crisis. The violence is endangering regional peace. Civilian lives have been lost, and others are endangered. 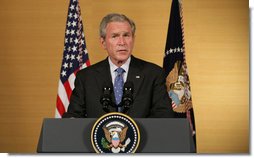 This situation can be resolved peacefully. We've been in contact with leaders in both Georgia and Russia at all levels of government. Georgia is a sovereign nation and its territorial integrity must be respected. We have urged an immediate halt to the violence and a stand-down by all troops. We call for an end to the Russian bombings, and a return by the parties to the status quo of August the 6th.

The United States is working with our European partners to launch international mediation, and with the parties to restart their dialogue. Russia needs to support these efforts so that peace can be restored as quickly as possible.

Laura and I were also saddened by the attack on an American family and their Chinese tour guide today in Beijing. Our thoughts and prayers are with the victims and their families. And the United States government has offered to provide any assistance the family needs.