For Immediate Release
Office of the First Lady
August 7, 2008

MRS. BUSH: Well, once again, thank you all for coming. As you can see, the buses are lined up, and a lot of these families will be leaving for the United States. This family is going to South Carolina, and I know they're excited, but I also know it will be difficult and I know they know that, too. They'll have a lot of firsts -- the first time ever to fly on a plane, and even the bus ride is a very, very long bus ride for them to get to the airport. Then they'll be in a country where everyone speaks English and they'll have to immediately work as hard as they can to bring their English up. But I want to wish them the very best. 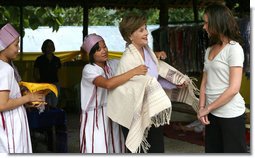 And I know that a lot of these families would rather go home, but because of the situation in Burma, they can't, and because many of them have been here so long, they've given up hope on being able to move home and have decided to move on to the United States or other countries. There are other countries -- Canada, New Zealand, the Netherlands. I want to encourage other countries as well to take Burmese, to allow Burmese to resettle in countries where people will have an opportunity to build their life.

So we see the buses here that are getting ready to go, and people will start driving off pretty soon, these people that are being resettled. And I know that on the other side, when they get to the United States, when this family gets to South Carolina, there are agencies there that are expecting them and that will be working with them to make sure they can get a job as soon as possible, find something to do as soon as possible and, of course, find housing. And they'll also be with them, these different agencies. Many of them are church-related; some are community groups that work with incoming refugees to make sure they can assimilate and help them along as they resettle and rebuild their lives in the United States.

So now I'd love to answer your questions.

Q Mrs. Bush, the gentleman, the vice camp leader, I believe, said some 13,000 new refugees have arrived that are not registered.

MRS. BUSH: We don't know that that's the number. There was a census here, and we -- I think there are around 40,000 people, 39,000-something people registered, and they know there are new ones since the last registration, several thousand. But I don't think anyone knows that there are 13,000.

Q You're right here on the border with Myanmar/Burma. Why do you believe the U.S. policy is actually working to isolate the military junta?

MRS. BUSH: Well, we don't see that. I mean, we're resettling people. That's -- as you know, there are a number of U.S. sanctions directed specifically at General Than Shwe and his cohorts in the junta, the top military leaders in the regime in Burma. We do think some of those are being effective, that they are being squeezed out; especially the financial sanctions are effective against them.

But we urge other countries to join us in those sanctions. The EU and some European countries have joined us, but we wish that other countries would. We think that the way we can be most effective is financially, is for the countries that are propping the regime up by their large trade with them to discontinue that for some amount of time at least to really put the squeeze on the junta so that they would finally start the dialogue that everyone has been calling for.

Tomorrow, August 8th, is the 20th anniversary of the 1988 crackdown in Burma; 20 years have gone by. Everything is still the same, or maybe worse, in Burma -- a country that was once the breadbasket that could feed itself and exported food. Now half the people who live in Burma suffer from malnutrition and hunger. And we know that. We know Burma is a very rich country, rich with natural resources. And the junta uses those resources to prop themselves up for their own benefit, not for the benefit of the people of Burma. And we, the United States government, has called on all of the neighbors and ASEAN -- and ASEAN actually has been working as well to try to encourage the Burmese junta to reach out to all of the National League of Democracy groups, the ethnic groups like the Karen that we are seeing here at this camp that have been persecuted, to really have a dialogue started so that Burma can start to build itself in a peaceful way, build the democracy that the Burmese people actually voted for in 1990.

MRS. BUSH: Well, that's a really good question, and we have talked to the Chinese quite often about this. As you know, the Chinese depend on a lot of energy exports, or imports into China, exports from Burma. And we urge the Chinese to do what other countries have done, to sanction, to put a financial squeeze on the Burmese generals so that they will reach out to the people in the country of Burma.

And, as President Bush has told you many, many times, he constantly speaks to the Chinese about a lot of issues -- not just Burma but other human rights issues. We try to work with them on the U.N. Security Council so that they won't be the ones, for instance, to veto the resolution on Zimbabwe that they just vetoed a few weeks ago, along with the Russians.

Q Mrs. Bush, you're highlighting today a lot of the NGOs who are doing work in Thailand. What is your view about the importance of doing more humanitarian work inside Burma? Obviously there was some one-time offer by the United States after the cyclone, but do you see a sort of a more enduring, longer-term role for the U.S. NGOs working inside Burma?

We did; we flew I think it was 185 missions, great big cargo planes of aid into Burma, and they allowed us to do that -- the generals, the junta allowed us to do that, although they did not allow those ships that we had right off the coast that had helicopters, and if they had been able to get in right away probably they could have been more effective in both getting aid to the people in the delta area of Burma, and also maybe rescue, search and rescue.

Q The U.S. now has some restrictions. Do you think those restrictions should be lifted and make it easier for work inside Burma?

MRS. BUSH: Our restrictions are basically targeted to -- our sanctions are basically targeted to the junta itself, General Than Shwe and the other generals. We obviously send aid, as you know, to all the U.N. organizations that are there. UNICEF and the World Food Program and other U.N. organizations that are working in Burma are very -- we, the United States government, is very close to them. And after the cyclone, we were able to fund some NGOs with the aid that they are distributing in Burma, and I think that's important. I think it's important for us to be able to continue to do that, and I hope that the people of Burma know that, that it's the United States that's funding some of these programs that are reaching to people with aid.

Q Mrs. Bush, what is your strongest impression of the people in the camps? And do you fear that the babies that are now being born here at this camp will never ever see Burma?

MRS. BUSH: Oh, I hate to say that. I mean, you know, it's -- one of the things that I like very much about the people of Burma, the people that I've met, the people I've had the chance to meet and the people I've met today, is their gentle sort of spirit and their hard work, their diligence. This is a camp, a refugee camp that the people here that live in this camp, the refugees themselves built. They built all of these buildings that we're in. You saw their -- you met with the members of their elected camp council, the people that are the elected council here.

So you see that not only did they move here and then go right to work to build their own homes and not wait for agencies or aid to come from other places to build their shelters, but also they elected a camp council that can represent each of them in a democratic way. And I think those things are very encouraging, and I think they also say something about the people of Burma, that the people of Burma will be able to run the country once they have a chance and once they -- the democratically elected government that was elected before has a chance to serve.

So I think that part of it is encouraging. It's worrisome that the -- that as much as people speak out from around the world, that the generals themselves, General Than Shwe and the junta, are not reaching out to all of the groups.

Now, there's been a little bit of -- for instance, the U.N. Special Rapporteur is there now, I think. I haven't actually heard of the results of that. But they've been a little bit more welcoming to the U.N., and maybe that's a really good first step. Maybe they are also realizing that it's time, and it's been a long time.

MS. McDONOUGH: Mrs. Bush, we probably have time for one more question.

MRS. BUSH: Okay, I'm sorry, my answers are too long.

Q Do you see the answer to Burma short term, or do you think it's going to be a longer generational struggle to change? I mean, do you think you can see the government leave within a year or two?

MRS. BUSH: Well, I mean, it's already been long term. It's been very long -- I mean, 20 years ago tomorrow was the day of the 1988 crackdown. That's a long time. When you know that refugees have lived in this camp for most of their life, that's a long time. And that is, you know, it's a tragedy. These are people who would much rather be in their own homes, who love their country and want to be with their families in their own country.

So, I don't know, but I hope that things will start moving a little bit faster, and I hope that maybe the response to the cyclone by people outside of Burma has let the people inside of Burma know that people are watching and that the international community is concerned about the people there and that we want them -- we want to encourage them to be able to build their country.

Q Do you think they're hearing that message?

Q Mrs. Bush, now you are arriving to the Mae La Refugee Camps, and now you are providing the spiritual help to the Burmese refugees. So there are 50 millions of Burmese peoples are waiting for your help. What are you going to do for them?

MRS. BUSH: Well, tell them that the United States government has put sanctions against the junta and that that's what we're trying to do. We're also working with all international organizations, especially the U.N., to see what we can to put pressure on the military junta to reach out to everyone there and to see what we can do about opening up the country.

MRS. BUSH: Well, they need to talk to somebody else, not the First Lady about that. (Laughter.) But I appreciate that.

Thank you all, thanks for coming with me on this trip, and I appreciate it a lot. 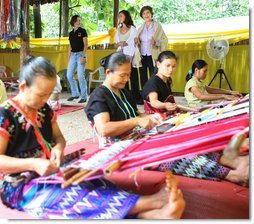 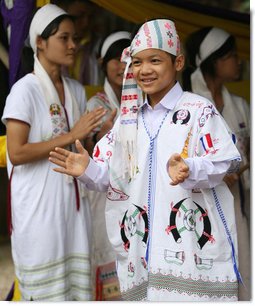