For Immediate Release
Office of the Press Secretary
August 6, 2008

THE PRESIDENT: Thank you all. Berlus -- how about the Corporal? What a silver-tongued devil. (Applause.) Thank you, Corporal Berlus. Thanks for the kind introduction. I'm feeling pretty spiffy in my new jacket. (Applause.) Feeling pretty warm in it, too. (Laughter.)

I am so honored to be here at "Freedom's Frontier." Thanks for coming out to say hello. I always look forward to the chance to say "Hooah!"

THE PRESIDENT: Sure! No better place to do it than right here with U.S. Forces Korea. I thank the units here from the 8th Army Pacific Victors --

THE PRESIDENT: -- and members of the Special Operations Command.

THE PRESIDENT: I appreciate the fact that you're carrying our flag with such honor in this vital part of the world. The American people are grateful for your service, and so is your Commander-in-Chief. Thank you.

THE PRESIDENT: I bring greetings to the South Korean military who is with us today -- members from the KATUSA and the Zaytun Division. (Applause.) We're honored by your friendship. We're proud of our alliance, and we're inspired by your work to advance the cause of liberty.

I also bring my love and greetings and appreciation to the military families.

THE PRESIDENT: Now, I understand our spouses did not take the oath of office when they enlisted. Matter of fact, their service to the country began with the simple words: "I do." So to the military spouses and to the children who are here, please know that the United States of America is grateful for the sacrifices that you all are making on behalf of our country. And I'm proud to be in your presence, and so is the First Lady of the United States, Laura Bush. (Applause.)

And I'm traveling -- or we're traveling with our daughter, one of two daughters -- welcome Barbara. (Applause.)

I know the Commander very well. See, I got to see General Sharp up close a lot during the last seven and a half years. He was in the Pentagon for a while; then he was transferred to this very important post. So, General Sharp, it's great to be with you again. Thank you for your fantastic service to our country. I'm proud to be with your wife. I also am proud to be with General Lee, Deputy Commander of the Combined Forces Command. It's an honor to meet your wife, too, General. How about Sergeant -- Command Sergeant Major Robert Winzenried. Robert, I'm glad you're here.

THE PRESIDENT: By the way, just so you sergeants understand, you are the backbone of the United States military. (Applause.) And I appreciate your service. 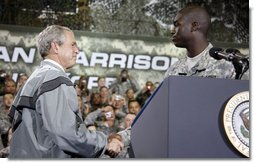 We're also here today with the Ambassador from the United States to Korea, Sandy Vershbow, and his wife, Lisa. Ambassador, thank you for your fine service to our country. Proud to be serving with you.

Fifty-five years have passed since the guns went quiet and the cease-fire was signed on this peninsula. Now, for some of you, 55 years seems like a long time. (Laughter.) But if you're 62 years old, it's just a snap of the fingers. (Laughter.) It wasn't all that long ago. And since that time, our forces have kept the peace. Our nations have built a robust alliance. Notice I'm saying "our nations." We're working side-by-side with our strong allies, the Korean people and the Korean military. And thanks to the contribution of men and women who are wearing the uniform just like you, the partnership between America and Korea has become one of the great success stories of modern times.

We've worked with our allies to help build a free and prosperous country out of the rubbles of war. And America is better off for it. Because of the sacrifice of troops just like you, a part of the world that was ravaged by war is now a -- is now peaceful. And that enhances the security of the United States of America. We're bringing hope to people, and that's important, for people to have hope.

One of the signs of Korea's emergence is a professional and capable military. It's one of the things you look for, when you see a country begin to get on its feet and take control of its destiny, is what kind of military does it have?

America is going to continue to stand with the Korean Peninsula, no question about it. And as South Korea has grown in strength, it takes a larger role, more significant role in its own defenses. And so America, in turn, is modernizing its presence. We're closing unneeded installations, and we're going to return this valuable land right here to the Korean people. See, this is a nice piece of real estate, as I'm sure you know. (Laughter.) And it's going to go back to the Korean people. And then we're going to relocate. And that will make this alliance even stronger and even more viable in the future.

This historic transfer is recognition of the skill and the capabilities and professionalism of the Korean forces. And those forces have become skillful and professional, thanks to the United States military. And I want to thank you for your contributions. (Applause.)

The bedrock of this alliance is our belief in liberty. And there's no place on Earth that more clearly demonstrates the contrast between free and open societies, and repressive, closed societies than the Korean Peninsula. No better place to see an example between the beauty of freedom and the hope of freedom, and the difficulties with repressive and closed societies. And South Korea takes its rightful place on the world stage; North Korea traps its people in misery and isolation.

The regime at Pyongyang has threatened the peace of the world with pursuit of nuclear weapons. We're responding to this challenge in two ways. First, you're making sure that there's a strong deterrent against North Korean aggression, and I appreciate that a lot. And secondly, we're going to stand united with South Korea and China and Japan and Russia until we reach our ultimate goal, and that is a Korean Peninsula where people are free from nuclear weapons and free from oppression. (Applause.)

There's another story from this region that's important for everybody to understand, and it shows that freedom is the surest path to move to a more peaceful world. In this part of the world, it's interesting to look at the history. In Japan -- a country that was at one time at war with the United States and obviously others -- freedom has helped transform the enemy into a ally. Freedom has helped transform that country into a prosperous and peaceful nation.

And in South Korea, freedom has helped turn a nation mired in poverty and recovering from war into a vibrant democracy and a strong partner. And here we are in the beginning of the 21st century, and once again, freedom is called upon to lay the foundation for peace that we all want.

We're at war. Oh, I know some in the United States say that we're not at war; they say it's a simple law enforcement matter. Well, in law enforcement you respond after the crime. Hopefully the September the 11th, 2001 lesson will teach us all that it's important to prevent the crime from happening in the first place; that we have a duty -- (applause.) And that's why it's important to use all assets of national power to keep the pressure on the enemy, to do our solemn duty to protect the American people from further harm.

But in the long run, I want you to remember that in this ideological struggle, the best way to yield the peace for our children and our grandchildren is to understand the transformative power of freedom. I brought a set of principles to the Oval Office, principles I will not compromise from. And one such principle is I do believe there's an Almighty, and a gift of that Almighty to every man, woman, and child on the face of the Earth is freedom. (Applause.) 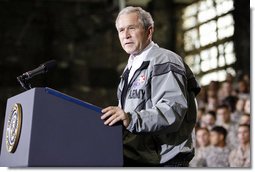 Some of Korea's bravest citizens are working to spread the hope of freedom to other nations, especially in the Middle East. Korean troops have served with courage alongside ours in Afghanistan and Iraq. And the people of Afghanistan and Iraq will always remember that the people of Korea stood with them in their time of need. And they'll always remember the contribution that our U.S. troops have made, as well.

Many of you have been to Iraq and Afghanistan. I thank you for volunteering to wear the uniform of the United States in this time of war. It's an amazing group of citizens who, in a time of war, say, I'm willing to serve; I want to serve my nation. And I want to thank you for making a huge difference in this great ideological struggle that is -- here in the beginning of the 21st century.

In Afghanistan we removed a dangerous regime that harbored the terrorists who plotted the attacks on September the 11th, and now we're working to make sure Afghanistan never again becomes a safe haven for terrorists to plot against us.

No question it's been a tough fight against al Qaeda and other extremists in Iraq. Since we launched the surge last year events have turned toward victory. The enemy is on the run. Violence is down. Iraqi forces are assuming more responsibility in the fight. Because of this progress, our troops have begun to come home under the policy of return on success.

We're going to continue to stand with the Iraqi people. America will continue to support the men and women who wear the uniform. And we will defeat the enemy overseas so we do not have to face them at home. (Applause.) 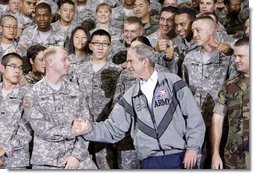