THE PRESIDENT: Thank you for the warm welcome. I am honored to be with you. No better place to refuel an airplane than right here. (Applause.) I appreciate you all coming out. I'm traveling today with the First Lady of the United States, Laura Bush -- (applause) -- our daughter Barbara Bush -- (laughter.) I've just got one thing to ask the folks here at Eielson. Iceman Team: Ready to go?

THE PRESIDENT: Absolutely! (Applause.) I thank the Iceman Team for joining us. I also want to thank the Arctic Warriors of Fort Wainwright for being here as well. (Applause.)

You know, I've been to a lot of military bases around the world. I don't think I've ever been to one where a moose can cause a traffic jam. (Laughter.) Or a base where the snowmobile is considered a lawn ornament. (Laughter.) And for you moms and dads out there, it must be a little strange in the summertime to say to your children, "Make sure you get home before dark." (Laughter.)

The United States military has had no better supporter and stronger friend than Senator Ted Stevens. Thank you for coming, Senator. (Applause.) Thank you for bring your daughter. Nothing wrong with a father bringing his daughter to an event like this.

I'm also pleased that the Governor of the great state of Alaska, Governor Sarah Palin, and her husband Todd are with us today, too. (Applause.)

I'm also proud to be here with people who have volunteered in the face of danger. There is no more important mission than to protect the United States from harm. Many of you volunteered after the attacks on the homeland on 9/11, 2001. You understand what I know: that it is best to defeat the enemy overseas so we do not have to face them here in the United States. (Applause.)

We have been unrelenting in our efforts to protect America, and I want to thank you for your service. There is no finer honor than being the Commander-in-Chief of a fine group of men and women, and I'm proud to be in your midst. 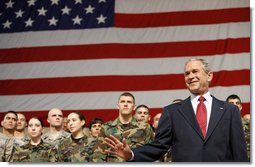 I want to thank the more than 200 airmen from Eielson who are deployed around the world, many in the Middle East. (Applause.) Their service in Afghanistan and Iraq and elsewhere is making this nation safer. And for the family members of those airmen, God bless you, and thank you for standing with your loved one.

Eielson is also the home of the "Guardians of the Last Frontier," the men and women of the Alaska Air National Guard 168th Air Refueling Wing. I'm an old Guard pilot myself; I want to thank the pilots who are here, and I thank those who help these planes stay in the air. Your contributions to Operation Enduring Freedom and Operation Iraqi Freedom are significant and important. (Applause.)

I want to thank the soldiers from Fort Wainwright. (Applause.) I'm proud to be standing with the men and women of Task Force 49 and the mighty Stryker Brigade. (Applause.) You got to know the folks from Task Force 49 are pretty tough; after all, they train in 50° below and they fight in 120° above. (Laughter.)

I appreciate what you're doing to support our missions, and I fully understand that a Stryker Brigade will soon deploy to Iraq. The other day I made it clear that our policy on rotations is now 12 months in, 12 months out. (Applause.) I know the Stryker Brigade from Fort Wainwright was one of the first brigades to extend, and I understand it puts stress on the families. Because of the progress we're making in Iraq, there's now certainty in the rotations.

And therefore, the United States, today and tomorrow, must stay on the offense and keep the pressure on this enemy and bring them to justice so they don't hurt the American citizen again. And we've got no greater asset than the United States military. (Applause.)

The Stryker Brigade that's heading into Iraq will be heading into a different situation than the previous Stryker Brigade when they first went into Iraq. About a year ago people thought Iraq was lost and hopeless. People were saying, let's get out of there; it doesn't matter to our national security. Iraq has changed -- a lot -- thanks to the bravery of people in this hangar and the bravery of troops all across our country. The terrorists on the run. The terrorists will be denied a safe haven, and freedom is on the march. And as a result, our children are more likely to grow up in a peaceful world. And I thank you for your service and I thank you for your sacrifice. (Applause.) 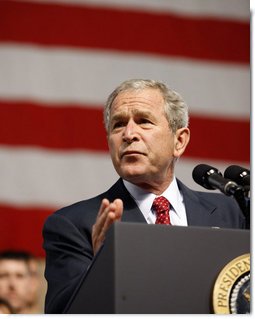 It is important for the United States of America never to forget the transformative power of liberty. I believe there's an Almighty, and I believe a gift of that Almighty to every man, woman, and child on the face of the Earth is freedom. And I know free societies yield the peace we all want. It's in our national interest to keep the pressure on the terrorists, to give them no safe haven, no place to hide, to keep them on the run.

It's also in our national interest to help others realize the blessings of a free society, so that when we look back at the initial chapters of the 21st century we will say, we've done our duty: We defended the United States of America and we laid the foundation for peace to come.

I want to thank you for your contributions to that hopeful chapter. I thank you for your courage. And there is no doubt in my mind that we will prevail. I've seen firsthand the character of the men and women who wear our uniform. I know such a man named Sergeant Gregory Williams. He's right here with us today. He was on night patrol in Baghdad when his vehicle was hit by an explosive device. The blast caused Sergeant Williams to lose consciousness. He recovered, and he put out the flames that were beginning to engulf him and the soldiers around him. He gave emergency aid to members of his platoon until he realized he was under enemy fire, and then he provided covering fire. He pulled his platoon leader out of the smoldering vehicle. Williams performed these actions despite the fact that he was burned himself, that he was wounded. His heroism that night saved the lives of his fellow soldiers, and for that he received the Distinguished Service Cross. And I'm proud to be in the presence of such a courageous American citizen. (Applause.)

All here have my pride and have my gratitude. And you have the thanks of our entire nation. We honor your service. We appreciate the sacrifice of your families. A lot of Americans will keep you in their prayers. May God bless you, and may God continue to bless the United States of America. (Applause.)