For Immediate Release
Office of the Press Secretary
July 31, 2008

THE PRESIDENT: Good morning. This has been a month of encouraging news from Iraq. Violence is down to its lowest level since the spring of 2004, and we're now in our third consecutive month with reduced violence levels holding steady. General Petraeus and Ambassador Crocker caution that the progress is still reversible, but they report that there now appears to be a "degree of durability" to the gains we have made. 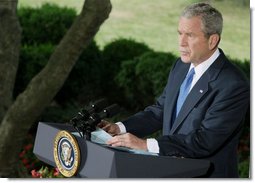 A significant reason for this sustained progress is the success of the surge. Another is the increasing capability of the Iraqi forces. Iraqi forces now have 192 combat battalions in the fight -- and more than 110 of these battalions are taking the lead in combat operations against terrorists and extremists.

We saw the capability of those forces earlier this year, when the Iraqi government launched successful military operations against Shia extremist groups in Basra, Amarah, and the Sadr City area of Baghdad. Because of these operations, extremists who once terrorized the citizens of these communities have been driven from their strongholds. As a result, our Ambassador to Iraq, Ryan Crocker, was able to walk the streets of Sadr City last Wednesday, as something that would not have been possible just a few months ago.

This week, the Iraqi government is launching a new offensive in parts of the Diyala province that contain some of al Qaeda's few remaining safe havens in the country. This operation is Iraqi-led; our forces are playing a supporting role. And in the moments -- in the months ahead, the Iraqis will continue taking the lead in more military operations across the country.

As security in Iraq has improved, the Iraqi government has made political progress as well. The Iraqi Council of Representatives has passed several major pieces of legislation this year, and Iraqi leaders are preparing for provincial elections. And Prime Minister Maliki recently returned from a successful visit to Europe, where he held important diplomatic discussions with Chancellor Merkel, Prime Minister Berlusconi, and His Holy Father Pope Benedict XVI.

The progress in Iraq has allowed us to continue our policy of "return on success." We now have brought home all five of the combat brigades and the three Marine units that were sent to Iraq as part of the surge. The last of these surge brigades returned home this month. And later this year, General Petraeus will present me his recommendations on future troop levels -- including further reductions in our combat forces as conditions permit.

As part of the "return on success" policy, we are also reducing the length of combat tours in Iraq. Beginning tomorrow, troops deploying to Iraq will serve 12-month tours instead of 15-month tours. This will ease the burden on our forces -- and it will make life easier for our wonderful military families.

We're also making progress in our discussion with Prime Minister Maliki's government on a strategic framework agreement. This agreement will serve as the foundation for America's presence in Iraq once the United Nations resolution authorizing the multinational forces there expires on December the 31st.

We remain a nation at war. Al Qaeda is on the run in Iraq -- but the terrorists remain dangerous, and they are determined to strike our country and our allies again. In this time of war, America is grateful to all the men and women who have stepped forward to defend us. They understand that we have no greater responsibility than to stop the terrorists before they launch another attack on our homeland. And every day they make great sacrifices to keep the American people safe here at home. We owe our thanks to all those who wear the uniform -- and their families who support them in their vital work. And the best way to honor them is to support their mission -- and bring them home with victory.