For Immediate Release
Office of the First Lady
July 30, 2008

MRS. BUSH: Welcome, everyone, to the White House. Thank you all very much for coming for this signing of the Tom Lantos and Henry J. Hyde United States Global Leadership Against HIV/AIDS, Tuberculosis and Malaria Reauthorization Act of 2008.

I'm so glad you all are here. Americans can be proud that our country is leading the efforts against global HIV/AIDS. And I'm proud of my husband's leadership in launching the President's Emergency Plan for AIDS Relief. (Applause.) 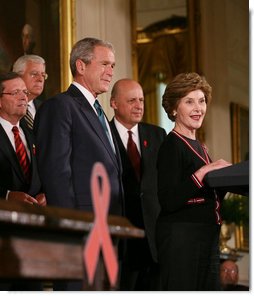 In Sub-Saharan Africa, Asia, the Caribbean, and beyond, PEPFAR is saving lives. I've seen these efforts firsthand in 10 of PEPFAR's 15 focus countries. Last summer in Zambia, I visited the Mututa Memorial Center. With support from PEFPAR, Mututa sends caregivers into local homes to nurse patients with AIDS and AIDS-related illnesses.

One of these patients, an HIV-positive boy named Raphael, was orphaned at the age of three. He was near death when a Mututa caregiver found him and started him on antiretroviral treatment. Now at the age of ten, Raphael told me he was first in his class and he was planning on attending the University of Zambia. His caregiver is still with him, and like a father to him now.

Another Mututa patient, Esnart, was plagued by body sores and recurring bouts of tuberculosis. Her husband abandoned her -- and took all of their household items with him. A caregiver from Mututa encouraged Esnart to be tested for HIV and helped her receive treatment. Esnart was soon strong enough again to start a business to support herself.

Like Raphael and Esnart, millions worldwide face the daily reality of illness and death caused by HIV/AIDS. These men, women, and children have now found new courage knowing this: that those who are orphaned, those who are sick, those who have been abandoned will always have a friend in the people of the United States.

Now, the man who began this work of compassion more than five years ago: my husband, President George W. Bush. (Applause.) 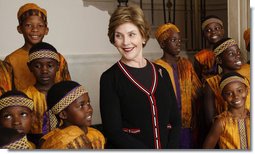