For Immediate Release
Office of the Press Secretary
July 29, 2008


Today in The White House Residence, President Bush met with five Chinese freedom activists to discuss his concerns about human rights in China. The President assured them that he will carry the message of freedom as he travels to Beijing for the games, just as he has regularly made this a priority in all of his meetings with Chinese officials. He told the activists that engagement with Chinese leaders gives him an opportunity to make the United States' position clear - human rights and religious freedom should not be denied to anyone. 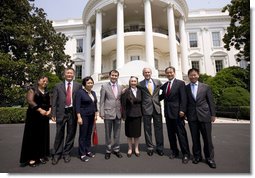 The President met with Harry Wu, Wei Jingsheng, Rebiya Kadeer, Dr. Sasha Gong, and Bob Fu. The President asked them about their personal experiences in their peaceful efforts to press for more freedom in China. The group welcomed the President's strong commitment to human rights and religious freedom and urged him to continue to deliver that message not only to the Chinese leadership but also to all the people of China.

President Bush also dropped by a meeting his National Security Advisor had this morning with Chinese Foreign Minister Yang Jiechi. The President reviewed current bilateral relations with the Foreign Minister; as well as his desire to see a successful Olympics, and noted that this presents the Chinese with an opportunity to demonstrate compassion on human rights and freedom.