For Immediate Release
Office of the First Lady
July 28, 2008

MRS. BUSH: Thank you all, and thank you very much, Abbie. That was terrific. We loved your poem, and you've really let us know about the diversity of our parks, starting on the East Coast, these parks that are close to you, and then of course going all the way to Hawaii with those volcanic parks that are there.

I'm so glad to be here with my friend, Senator Dole. Thank you very much, Elizabeth, for joining me. Senator Dole has made the preservation of the Carl Sandburg Home National Historic Site a priority. Last year she introduced legislation to expand its boundaries so that a house and a new visitor's center and parking area can be built. This measure was signed into law by President Bush in May. Thank you very much, Senator, for all your support of this park and for your support of all our national parks. (Applause.) 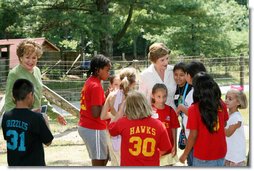 Representative Heath Shuler introduced Senator Dole's legislation in the House, and his wife Nikol was here -- I don't know if Nikol is -- there's Nikol, right here. I kept looking for you but I was blinded by the sun. (Laughter.) Thank you very much, and thank you for Congressman Shuler's support, too, for all of our parks.

I want to recognize all the state and local officials who are here. I want to especially recognize the superintendent of Carl Sandburg Home National Historic Site, Connie Blacklund -- Backlund, rather; Linda Holt, the president of the Friends of Carl Sandburg Home is here as well. And then especially the students of the Boys and Girls Club of Henderson County, who I got to meet earlier when they were working on all of the special activities that they can do as Junior Rangers.

My love for our national parks began when I was a Girl Scout, and my mother took -- who happened to be my Girl Scout leader -- took my troop to Carlsbad Caverns, New Mexico, which was the closest national park to Midland, where George and I grew up. I never imagined then -- one day that one day our family would live in a national park. Many of you may not know that the White House grounds are one of our national parks. And all of the employees, all of the gardeners that tend the Rose Garden and the First Ladies' Garden and everything at the White House are National Park employees.

Since that first trip to Carlsbad Caverns, I've traveled to our national parks for years -- hiking in our magnificent Western parks, like the Grand Canyon and Yellowstone. This summer I hiked in Acadia National Park in Maine. Our next stop is going to be -- has to be the Great Smoky National Park, because we haven't hiked there. I hike with a group of women friends that I grew up with in Midland. We've hiked literally for years, every summer, in one of our national parks, and it's been one of the happiest ways for us to continue our friendship with each other. When we -- about three years ago, we asked our daughters to go with us, and we hiked in the Grand Canyon. We did the river trip down the Colorado River, and then hiked the 10 miles out with our girls. We had a wonderful time showing them that, but then they said, "Well, are we going to get to go on these trips from now on?" And we said, "No." (Laughter.) 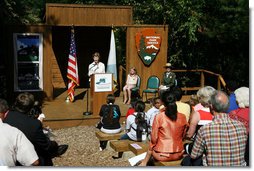 But we didn't take them hiking that much, but we modeled that to them and they both have hiked a lot. In fact, you may have read that Jenna got engaged at the top of Cadillac Mountain in Acadia National Park, which is the first place in the summer that sees the sun, the sunrise, in the United States, which I think is a very romantic place for her husband to have thought of to ask her.

As I've traveled in all these parks all of these years, I've seen how young people across the United States are helping preserve these parks, the young people like the members of the FRESH program here at Carl Sandburg Home. The FRESH youngsters are the ones who spend at least three hours a week tending to the goats that we saw in the barn and teaching visitors about the farms. And so thank you to each of you for caring about your local park.

Today's visit to the Carl Sandburg Home indulges not only my love of exploring our parks but also another love of mine, and that's reading. And another thing I've tried to do -- and I've had the good fortune of being able to do, because my husband is here -- is I've visited the homes of our great American writers. Most of them are not national historic sites like the Carl Sandburg Home -- and I know you're very fortunate to have this be a national historic site -- but I visited Louisa May Alcott's home and Mark Twain's home and Edith Wharton's home, and now here at the Carl Sandburg Home, I'm thrilled to have this chance to see the homes of our major American writers, the ones who have influenced generations of Americans with their writings.

Carl Sandburg's works range from poems to biographies to newspaper articles. He created a series of American fairy tales for his daughters, because he thought that those European fairy tales with princesses and queens and kings weren't really suitable for American children. He gave his daughters very funny nicknames. These were his -- what were considered his affectionate nicknames. I don't know if Barbara and Jenna would have liked it if we had called them Spink, Skabootch, or Swipes, but that's what he called his girls. (Laughter.) 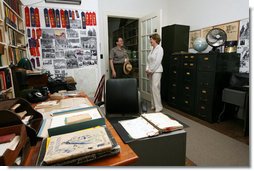 In just a minute, we're going to get to see a performance of two of the "Rootabaga Stories," which were two of these fairy tails, American fairy tales that he made up for American children.

Of course, Carl Sandburg is most known for his famous series on Abraham Lincoln, teaching us about the life of this beloved, and I'd have to say most beloved President. Sandburg's best-known poem, "Fog," has taught countless students the meaning of metaphor with its first line: "The fog comes in on little cat feet."

Sandburg was asked to recite this poem so many times that he began to change the words around and would say things like, "The fog comes on itti bitti kitti footsies." (Laughter.)

The legacy of creativity that Carl Sandburg left behind for us is carried on here in this park with the Junior Rangers program. In 2006, the National Park Foundation and its charitable partner, Unilever, matched contributions from the Friends group here at Carl Sandburg Home and the Henderson County Community Foundation to help establish the park's Junior Ranger program. Junior Rangers here can pet the relatives of Mrs. Sandburg's prize-winning goats. They can tour the Sandburg home, like we just did. They can listen to Carl Sandburg sing folk songs he collected during his many travels. And they can have their hand at writing poetry of their own -- like the poem that Abbie just shared with us.

I want to congratulate all the Junior Rangers who were sworn in today. I hope that some of you will be inspired to grow up to become real Park Rangers and have a career like Connie has where she's been at Mount Rainier on the West Coast of the United States. She's been here; she's been in the Everglades Park in Florida. I hope you'll all consider what kind of interesting life you could lead if you grew up to actually be a Park Ranger.

This funding will help the Carl Sandburg Home expand its Junior Ranger programs and its other education initiatives. And I want to thank the National Park Foundation for supporting this important work. By getting youth involved in our national parks at an early age, we can ensure that these valuable resources, our most magnificent natural and historic sites, will be preserved for generations to come. 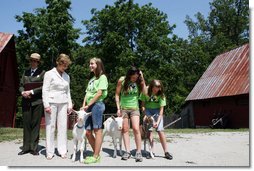 So thank you all very much, and I'm so happy to be here with you today. (Applause.)