For Immediate Release
Office of the Press Secretary
July 22, 2008

THE PRESIDENT: Thank you. Siéntese. Gracias. Buenos dias. Bienvenidos a la Casa Blanca. (Applause.) I am pleased to welcome you to the gathering of the 198th anniversary of Colombia's independence, which was celebrated last Sunday in grand style. Colombia and the United States have a long history of close ties. As many of you may know, Colombia supports [sic] America's primary source of energy -- a resource that many Americans use, and we thank you for your coffee. (Laughter.) 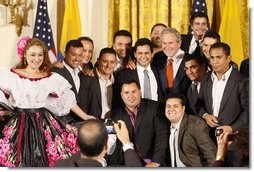 I'm proud that the Secretary of Agriculture is with us, Eddie Schafer, Secretary of Commerce Carlos Gutierrez, Chief of Staff Bolten, Director John Walters, the Office of Drug -- of National Drug Control Policy; other members of my administration who are concerned about making sure our relationship with Colombia is strong and vibrant.

I appreciate very much the members of the Congress who have come today: Dreier, Herger, Diaz-Balart. Thank you all for coming. Thank you for showing your solidarity with the people of Colombia.

I appreciate very much the Embajadora de Colombia. Ambassador Barco, thanks for coming. Carolina Rentería is with us, of the cabinet, the President's cabinet. Welcome. Hector Morales, the Ambassador of the United States to the Organization of American States. Camilo Ospina, Ambassador of Colombia to the Organization of American States. Luis Moreno, proud Colombian citizen, President of the Inter-Amercian Development Bank -- hola, Luis. Representatives of LULAC, I am so proud of the resolution you recently passed, thank you for your -- (applause.)

And after this brief discurso, I'll be welcoming Jorge Celedón y Jimmy Zambrano to entertain us with some songs.

Before we do, though, I want to -- got some comments I'd like to make.

Our countries have shared a strong bond from the very beginning. In 1822, President James Monroe was one of the first heads of state to recognize Colombia's independence. And that same year, America became one of the first countries to establish a new diplomatic mission with that republic. From those strong foundations we built a lasting friendship on a mutual respect for liberty and a commitment to a more peaceful world.

This friendship has endured through good times and bad. Less than a decade ago, it looked as if peace and freedom were on retreat in Colombia. The country was in the grip of drug cartels and kidnappers. The Marxist terrorist network known as the FARC threatened to overthrow the democratically elected government. These were tough times for our friend. Our two nations launched an ambitious program that helped rescue Colombia from the brink of becoming a failed state. 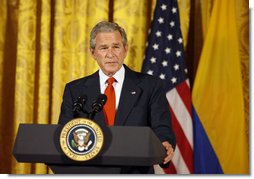 Plan Colombia, which started under my predecessor, made it clear that the United States would support the Colombian government's efforts to modernize its military, to fight terrorists and drug kingpins, to expand educational opportunities, and provide Colombians with alternatives to a life of terror and narco-trafficking. The Colombian government has taken the lead on this bold plan, and the United States has been proud to help. And today, Plan Colombia is working. (Applause.)

One of the main reasons for Plan Colombia's success is the courage of Colombia's President, President Uribe. (Applause.) President Uribe has taken bold stands to defend our shared democratic values. He has been a strong and capable partner in fighting drugs and crime and terror. He's demonstrated that he is deeply committed to providing a better future for the people of his country.

Since President Uribe took office, the Colombian government reports that homicides have dropped by 40 percent, kidnappings have dropped by more than 80 percent, terrorist attacks have dropped by more than 70 percent. Reforms to Colombia's criminal justice system have dramatically increased conviction rates. And last year, Colombia's economy saw its largest growth in nearly three decades. These are impressive achievements -- and they're a testament to the determination of the Colombian people and their outstanding President.

Earlier this month, President Uribe's administration scored another impressive triumph. In a daring covert operation, members of the Colombian military infiltrated the FARC, and convinced the terrorists to transfer 15 hostages -- including three Americans -- to a new location. Disguised Colombian agents arrived in a helicopter to carry out the transfer. And when the hostages lifted off, they were astonished to hear an army officer say nine words they thought they would never hear: "We are the Colombia Army, and you are free." (Applause.)

Today, three Americans are back with their families because of the heroism of the Colombian allies. On behalf of our entire nation, I welcome home Marc Gonsalves, Thomas Howes, and Keith Stansell -- and I thank the brave members of the Colombian military who rescued them. 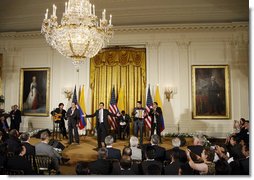 The success of this rescue mission underscores the progress the Colombian government has made. This progress is also evident in the hearts and minds of the Colombian people. On Sunday, more than a million Colombians marched in their nation's streets, and called on FARC to release its remaining hostages and to stop practicing terror. They chanted a simple, but powerful message -- "Libertad" -- that means freedom. (Laughter.) America should support this noble stand by the Colombian people. And the single most important step we can do so is for the United States Congress to approve the Colombia free trade agreement that our countries signed more than a year and a half ago. (Applause.)

Approving this agreement would strengthen our nation's economy. Because of legislation that the Congress has passed -- particularly the Andean Trade Preference Act -- today, almost all Colombian exports enter the United States duty free. The Congress made that decision. Yet our products exported to Colombia face tariffs of up to 35 percent, with rates even higher for some agricultural products. In other words, the current situation is one-sided. And the failure to approve the free trade agreement is hurting our businesses who want to sell their products into Colombia.

Tariffs imposed on U.S. exports to Colombia are estimated to have exceeded $1.1 billion while the trade agreement has awaited congressional approval. Every day that passes without the agreement's approval, that number only gets bigger. Congress has already voted to allow duty free access to American markets for Colombian products. Now Congress should create a level playing field -- they ought to give American workers and farmers the same access to Colombia's markets. And the way for them to do that is to approve the free trade agreement. (Applause.)

Opening markets is especially important during this time of economic uncertainty. Last year, exports accounted for more than 40 percent of America's total economic growth. Doesn't it make sense to continue that kind of growth during these economic uncertain times? I think it does. We ought to be working to open up new opportunities and new markets. More than 8,000 small and mid-sized American businesses export to Colombia. Approving this agreement will help these small businesses and middle-sized businesses grow their businesses and create high-paying jobs.

Approving this agreement is also an urgent national security priority. It makes good economic sense, but it's important for our national security that the Congress approve this agreement. While the FARC has seen its power reduced, the terrorists are still actively plotting against the Colombian government. Colombia also faces a hostile and anti-American neighbor in Venezuela, where the regime has forged an alliance with Cuba, collaborated with FARC terrorist leaders, and provided sanctuary to FARC units. It is in America's interests to stand by Colombia in the face of this threat -- and the best way to do so is for Congress to allow a vote on the Colombia free trade agreement.

President Uribe has stood strong against tyranny and terror. He's done everything we have asked him to do and more. He's told members of Congress that approving this agreement is one of the most important steps that America can take to show its support for Colombia. Now the Colombian people are waiting to see what our Congress will do. To demonstrate America's good faith, to stand by our strong friend, to send a clear signal that we appreciate our ally, the United States Congress must approve this free trade agreement. (Applause.)

And once they do so, Congress should quickly approve our free trade agreements with Panama and South Korea. By doing so, they can reassure these countries that America will stand by its word -- and that we will not abandon our friends.

It's been nearly two centuries since the United States of America and the nation of Colombia forged a friendship in the earliest days of our independence. In the years since, both of our nations have learned that the cost of maintaining a free society is remaining vigilant against the enemies of freedom. We believe that freedom is the birthright of all. We believe that it is the responsibility of free nations to support one another against those who would undermine our freedom.

The United States is committed to the security of Colombia -- we're committed to defeating the forces of terror. Our countries can meet this challenge together. And through our partnership we can usher in a new era of enhanced prosperity and peace in our neighborhood.

I want to thank you for coming. Que Dios le bendiga. (Applause.)