For Immediate Release
Office of the Press Secretary
July 21, 2008

THE PRESIDENT: Thanks. Welcome to the Rose Garden. Please sit down. We are thrilled to welcome members of America's 2008 Summer Olympic and Paralympic teams to the White House. Welcome. (Applause.) Today we honor skill and discipline. You're here because of the support of your coaches and your trainers and your families and your friends. They are proud of what you've accomplished -- and so are the American people. And we're looking forward to rooting for you in Beijing. (Applause.) 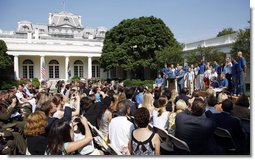 Mr. Secretary, thanks for coming. I want to welcome the U.S. Olympic Committee staff; welcome the military personnel who are with us; and welcome the rest of you. (Laughter.)

In the coming days, around 600 American athletes will arrive in China for the 29th Olympic Games. You're going to compete in 30 different sports, ranging from soccer to sailing and from judo to gymnastics. Together, the talented men and women of Team USA will represent the great diversity of our country. You come from nearly every state. Some of you are young -- the youngest teammate is a 15-year-old diver -- and some of you are old -- er. (Laughter.) There's a 58-year-old sailor, which gives this 62-year-old mountain biker hope -- (laughter) -- that you may need me in Beijing. (Laughter.)

Team USA shows the great power of sports to bring people together -- and there's no sporting event that unites people like the Olympics. All Americans will rally behind you when you compete in Beijing. (Applause.)

We will be fascinated by the different stories behind each athlete. We will marvel at your hard work and your discipline. For example, the story of Matt Grevers. Matt seemed like a long shot to qualify for the U.S. team in the 100-meter backstroke. Because his parents are Dutch, the Netherlands tried to recruit Matt to swim for his team -- offering him nearly a certain trip to Beijing. Instead he chose to compete for the U.S. team, and ended up qualifying in both the freestyle and the backstroke. And when he swims in Beijing, it will be as a proud citizen of the United States of America.

Or we think of the story of Lopez Lomong. When Lopez was just six years old, his family had to flee their village in Sudan when it was attacked by the Janjaweed. Lopez was separated from his family, who assumed he was dead. The little boy spent three years -- three days running from the militants, and then ten years in refugee camps. He finally made it to our country as a teenager and his athletic career took off. Earlier this month, Lopez qualified for the Olympics in the 1500 meters. And now the boy who once had to run for his life is a man about to run for gold in Beijing -- representing the United States of America. (Applause.)

We think about Scott Winkler. Scott didn't spend his whole life training to become an elite athlete -- but athletic competition helped give Scott his life back. Scott was an Army specialist serving in Iraq when an accident cost him the use of his legs. He found healing in the Wounded Warrior Project, in his work to mentor young people, and in wheelchair sports. Last month, a magnificent throw earned Scott an American record -- and a spot on the U.S. Paralympic team. And here's the way he put it: "I fought for this country, and now I'd love to win for this country" in Beijing. Scott, we honor your service to our country, we thank you for coming today, and we'll be pulling for you. (Applause.) 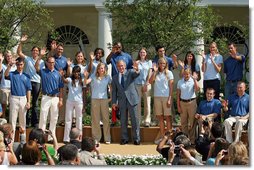 America's Olympians have two very important things in common: God-given talent, and an appreciation for the hard work required to achieve true excellence. The amazing athletic displays we see on our TV every four years result from the hard work that our athletes put in during the four years. For us, it's a moment; for them it's a moment -- a life of dedication.

Olympians don't rest on their laurels -- they wear them. (Laughter.) Being a champion takes character. It also entails responsibility. In Beijing you will convey our nation's most cherished values. As ambassadors of liberty, you will represent America's love for freedom and our regard for human rights and human dignity. You'll represent to other athletes and to the people of China. In Beijing, you'll also represent our nation's character. As ambassadors of goodwill, you will be humble in victory and gracious in defeat. And by showing respect for your competitors, you will demonstrate America's respect for the world.

Laura and I look forward to joining you for the Olympics. I'm fired up to go. (Laughter.) I can't wait to salute our athletes, and I can't wait to share in the joy of your triumphs. And so today we send you off with congratulations on the success you have already achieved, and on the accomplishments we know will be yours in Beijing.

May you and your teammates compete "Swifter, Higher and Stronger" in the games. And may God bless you as you represent our wonderful nation. (Applause.) 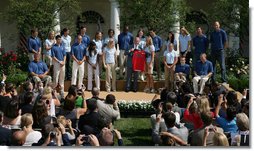