For Immediate Release
Office of the Press Secretary
July 21, 2008

PRESIDENT BUSH: It has been an honor to welcome the President and Prime Minister of an independent Kosovo to the Oval Office. I'm proud you all are here. I welcome you. I'm a strong supporter of Kosovo's independence. I'm against any partition of Kosovo. I believe strongly that the United Nations mission must be transferred to the EU as quickly as possible. I want to thank you very much for your support of minority rights, the full implementation of the Ahtisaari plan. 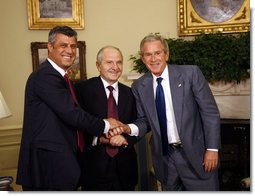 We discussed a variety of issues. We discussed the problems that Kosovo faces, its desire to be recognized by more nations around the world. I pledged that the United States would continue to work with those nations that have not recognized an independent Kosovo to convince them to do so as quickly as possible.

We talked about economics, education. And we talked about the transatlantic aspirations of both Kosovo and Serbia, which the United States supports in both cases.

PRESIDENT SEJDIU: (As translated.) It's an extraordinary occasion for us to be received by President Bush to convey to him all of the aspirations and all the thanks of the Kosovo people -- heartfelt thanks.

The Kosovo people have been following democracy, the principles of democracy and freedom. And the United States are -- they're our supporters. We guaranteed President Bush that we will continue on this road, and at the same time to implement the Ahtisaari document.

Kosovo will be a country of democracy, a country of all its citizens. It will have a special respect for the minorities. We are very much interested to have good relations with the Republic of Serbia. Our progress will be with the integration of NATO and the EU.

Again, my heartfelt thanks, and God bless America.

PRIME MINISTER THACI: (As translated.) Today's meeting with President Bush not only reiterates the fact that we are closely connected with the United States, but will always be their trustful friend, forever.

We have always trusted the United States and trusted the development of our country and that it will be to the benefit of the international development.

The Kosovo government and the Kosovo people will always bow in deep respect for the United States and for the U.S. administration. It is a joint success story. We are building a democratic Kosovo, affirmative action for the minorities. We'll develop economic -- Kosovo economically. We'll have excellent relations with all our neighbors, and in the future with Serbia.

As a sovereign and democratic country we want to be part of NATO and part of the EU and have excellent relations with the United States. This is our pledge, this is our responsibility, this is our vision.