For Immediate Release
Office of the Press Secretary
July 17, 2008

THE PRESIDENT: It's been my honor to travel with the Governor and the Senator and Forest Service folks and fire folks here in California to see the fires. Couple of things I'd like to reflect on and then I'll ask the Governor to say a couple of words.

One, I always come to make sure that the federal government is coordinating closely with the state government. I know Governor Schwarzenegger well enough to tell you that if we weren't, he'd let me know. And I want to thank those who work for the federal government for their hard work and willingness to respond quickly and their service to our country. 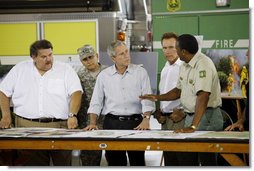 Secondly I want to say something to the firefighters -- we had the privilege of going and meeting some of the smoke jumpers. These are unusual people who are very courageous, determined and dedicated. And I had this special sense when I was with them, the espirit de corps and I want to thank them for their courage.

I want to thank all those who are helping making the effort work here -- people are working long hours and the citizens of this part of the world really, really thank you for it.

I want to thank the Boy Scouts -- we've got three Scouts here who are representative of a bunch of Scouts who are working on the Healthy Forest Initiative and are helping make sure these firefighters don't have to deal with some of these hot blazes the way they have in the past.

And finally I'd like to just let the people out here know that we're paying attention in Washington, D.C., we care about you, and that we'll respond as best as we possibly can.

GOVERNOR SCHWARZENEGER: Thank you very much, Mr. President, for coming out here and taking this aerial tour and getting a briefing here. And I just would like to thank, also, Senator Feinstein for coming out here also and for the great coordination and always working with us very closely.

And I just was saying to the President how much we appreciate and how much we wanted to thank him for the great assistance that we have gotten these last few weeks -- and also last year, with the last fires. There was immediate action. We make it very clear that we are very good at fighting fires. We can fight 20, 30 fires at the same time because we have the best firefighters, the bravest, the best experienced firefighters in the world, without any doubt.

But when you hear that there are 2,000 fires at one given time, that's a little bit too much for us and for all the great firefighters. So we need then the assistance and the help. And the federal government came in very quickly; there was quick reaction. All the departments and the various different Secretaries have called us -- U.S. Forest Service, Homeland Security -- everyone was on the phone and we had our briefings, we coordinated. And what made us successful in fighting these fires was this extraordinary coordination between the locals, the state and the federal government.

And without the federal government you wouldn't be able to do it. You have right now 20,000 firefighters out there fighting these fires. We have 1,500 fire trucks. Just if you think about those numbers -- and 80 percent of the U.S. resources in firefighting are right now in California. So this is an extraordinary kind of growth in the federal government and I just want to say thank you, because each and every one of those Secretaries kept saying to me: President told us to do everything that we can to help California. And that's great, great news.

So I wanted to also say thank you very much to Senator Feinstein, because she was on those conference calls and she called and made sure that everyone is coming to together and all this. So again I want to thank also the Homeland Security Office, the OES and everyone that has worked so hard -- the volunteers that came in and helped the -- you know, helped the victims and the people that had to be evacuated. So thank you very much for your great help.