For Immediate Release
Office of the Press Secretary
July 16, 2008

PRESIDENT BUSH: Mr. President, thank you for coming. I first started my conversation with the President by complimenting him on his leadership in the United Nations and in the region. You've been a constructive force for peace and stability.

And we talked about Zimbabwe. I made my position abundantly clear that, one, we are disappointed with the veto of the U.N. Security Council resolution, for which both our nations worked in concert. Secondly, we deeply care about the plight of the citizens of Zimbabwe. And we hope there's a peaceful resolution soon. I told the President, in the meantime our government is looking at, you know, sanctions beyond that which would have been levied out of the U.N. Security Council. 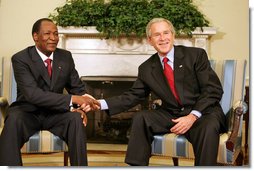 I congratulated the President on the fact that his good nation is a recipient of a Millennium Challenge Account program. It's a program aimed to help farmers, entrepreneurs, and girls and women. It's the right thing to do, Mr. President. This grant would not have been awarded without your commitment to fighting corruption, your willingness to invest in the health and education of your people, and your adherence to marketplace principles. So I congratulate you, sir, on that.

Finally, I talked to him about issues that are dear to my heart, and that are the issues of HIV/AIDS. I congratulated his country for being effective at preventing the spread of AIDS. And we talked about malaria.

PRESIDENT COMPAORE: (As translated.) First of all, the President and I seized this opportunity to meet, and the first thing I did was to show gratitude to President Bush for the engagement of the United States in favor of our country, Burkina Faso, and especially in terms of poverty reduction and economic development and all the help.

But I said to the President, other than Burkina Faso, all the continent of Africa is very grateful to the initiatives taken by the United States administration in terms of debt reduction, public aid to development, fight against HIV/AIDS, and building schools in our country.

And again, I congratulate President Bush, Congress, and the American people for their commitment for Africa.