For Immediate Release
Office of the Press Secretary
July 14, 2008

THE PRESIDENT: Thank you all, please be seated. Welcome. I want to welcome Congressman Wolf, Congressman Smith, Congressman Franks, former Senator Nickles; thank you all for coming. I'm so honored that you've come to celebrate the 10th anniversary of the International Religious Freedom Act.

This legislation that we commemorate today builds on a tradition that defined our nation. After all, when the Founding Fathers adopted the Bill of Rights, the very first liberty they enshrined was the freedom of religion. They recognized that the most basic freedom a man can have is the right to worship his own God as he sees fit. Today we are blessed to live in a country where that freedom is respected. 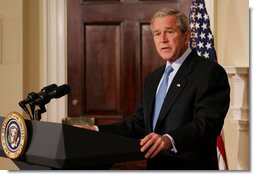 In too many countries, expressions of freedom were silenced by tyranny, intolerance and oppression. So a decade ago, members of Congress -- I suspect some of the members here -- and religious leaders and human rights activists came together to advance religious freedom around the globe. The result of their work was the International Religious Freedom Act. The bill created vital diplomatic tools to help our government to promote religious liberty abroad. The Act established an ambassador-at-large position to ensure that religious liberty remains a priority of every administration -- and I want to thank our current Ambassador, John Hanford, for joining us today. And thank you for taking on this important job.

In all these ways, the Act has placed religious liberty where it belongs -- at the center of U.S. foreign policy.

We've seen some hopeful progress during the last couple of years. We've seen in Turkmenistan, where the nation's chief mufti had been ousted and imprisoned for refusing to teach state propaganda as a sacred religious text. Through efforts authorized by the International Religious Freedom Act, the United States pressed for the mufti's release. In 2007, mufti Ibadullah pardoned and freed -- he has since become an advisor to Turkmenistan's Council on Religious Affairs.

We've seen some progress in Vietnam. The United States used the tools of this Act to press for the release of dozens of religious prisoners -- all of whom have been freed. Vietnam's government has reopened many of the churches it had shut down. And most religious groups report a decrease in the government's oppression of believers. This Act has encouraged Vietnam to take some promising first steps toward religious liberty -- and we're going to continue to work toward the day when all Vietnamese are free to worship as they so desire.

The 10-year anniversary of the International Religious Freedom Act is also an occasion to remember the many people who have yet to secure this precious liberty. Our thoughts turn especially to those living in the countries where religious freedom is of particular concern. Some of these nations have taken steps toward reform. Others haven't. Today we urge the leaders of all these countries to immediately end their abuses of religious freedom. And we urge these leaders to respect the rights of those who seek only to worship their God as they see fit.

We remember those seeking religious freedom in Uzbekistan, where in the past members of religious minorities have been beaten and jailed -- yet where recent agreements give us hope that these abuses will not be repeated in the future.

We remember those seeking religious freedom in Saudi Arabia, where the religious police continue to harass non-Muslims -- yet where we also believe reforms pledged by King Abdullah can bring real change. We remember those seeking religious freedom in China, and we honor those who press for their liberties -- people like Uighur Muslims. I had the honor of meeting Rebiya Kadeer. I've also had the honor of meeting those who attend underground churches in China. And we also honor the courage of the Dalai Lama, and the Buddhists in Tibet.

And you know, last month here at the White House I met with a Chinese dissident named Li Baiguang. He's a lawyer who worked on human rights cases; he's a "house church" Protestant. For his work, he's been repeatedly jailed and attacked. A few weeks ago, he was scheduled to meet with members of Congress. State authorities blocked the meeting and detained Li on the outskirts of Beijing. This determined man has pledged: "I'll continue to ... seek justice for victims of rights abuses, and promote the rule of law in China." And my message to President Hu Jintao, when I last met him, was this: So long as there are those who want to fight for their liberty, the United States stands with them.

Whenever and wherever I meet leaders, I'm going to constantly remind them that they ought to welcome religion in their society, not fear it. I'll remind them someone pledged to love a neighbor like they'd like to be loved themselves is someone who will add to their society in constructive and peaceful ways.

I'm met by men and women who are working for religious freedom around the globe, people like Li. And when I do I'm always impressed by their courage. I've attended worship services from Hanoi to Beijing. And when I speak to world leaders, I remind them -- leaders in those countries, that the worship services are a necessary part of developing a society for which they can be proud.

And so as we celebrate the 10th anniversary of the International Religious Freedom Act, we pray that all those who seek their God will be able to do so free of oppression and fear.

I want to thank you all for your good work, and I ask for the good Lord to continue to bless our country. Thank you for your time. (Applause.)