For Immediate Release
Office of the Press Secretary
July 10, 2008

THE PRESIDENT: Thank you. Welcome to the Rose Garden. Today I'm pleased to sign landmark legislation that is vital to the security of our people. The bill will allow our intelligence professionals to quickly and effectively monitor the communications of terrorists abroad while respecting the liberties of Americans here at home. The bill I sign today will help us meet our most solemn responsibility: to stop new attacks and to protect our people. 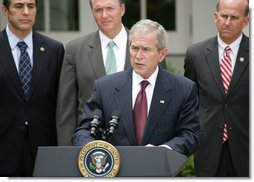 Members of my administration have made a vigorous case for this important law. I want to thank them and I also want to thanks the members of the House and the Senate who've worked incredibly hard to get this legislation done. Mr. Vice President, welcome.

Respect the members of the Senate and the House who've joined us -- Senate Republican Whip Jon Kyl; John Boehner, House Republican Leader; Roy Blunt, House Republican Whip. I do want to pay special tribute to Congressman Steny Hoyer, House Majority Leader, for his hard work on this bill. I thank so very much Senator Jay Rockefeller, Chairman of the Senate Select Committee on Intelligence, and Senator Kit Bond, Vice Chairman, for joining us. I appreciate the hard work of Congressman Silvestre Reyes, Chairman of the House Permanent Select Committee on Intelligence, and Congressman Pete Hoekstra, Ranking Member. I also welcome Congressman Lamar Smith, Ranking Member of the House Judiciary. I thank all the other members of the House and Senate who have joined us. I appreciate your very good work.

I welcome Attorney General Michael Mukasey, as well as Admiral Mike McConnell, Director of National Intelligence. I appreciate other members of the administration who have joined us. I want to thank the congressional staff who are here, and all the supporters of this piece of legislation.

Almost seven years have passed since that September morning when nearly 3,000 men, women and children were murdered in our midst. The attack changed our country forever. We realized America was a nation at war against a ruthless and persistent enemy. We realized that these violent extremists would spare no effort to kill again. And in the aftermath of 9/11, few would have imagined that we would be standing here seven years later without another attack on American soil.

The fact that the terrorists have failed to strike our shores again does not mean that our enemies have given up. To the contrary, since 9/11 they've plotted a number of attacks on our homeland. I can remember standing up here -- I receive briefings on the very real and very dangerous threats that America continues to face.

The legislation I am signing today will ensure that our intelligence community professionals have the tools they need to protect our country in the years to come. The DNI and the Attorney General both report that, once enacted, this law will provide vital assistance to our intelligence officials in their work to thwart terrorist plots. This law will ensure that those companies whose assistance is necessary to protect the country will themselves be protected from lawsuits from past or future cooperation with the government. This law will protect the liberties of our citizens while maintaining the vital flow of intelligence. This law will play a critical role in helping to prevent another attack on our soil.

Protecting America from another attack is the most important responsibility of the federal government -- the most solemn obligation that a President undertakes. When I first addressed the Congress after 9/11, I carried a badge by the mother of a police officer who died in the World Trade Center. I pledged to her, to the families of the victims, and to the American people that I would never forget the wound that was inflicted on our country. I vowed to do everything in my power to prevent another attack on our nation. I believe this legislation is going to help keep that promise. And I thank the members who have joined us. And now it's my honor to sign the bill.