For Immediate Release
Office of the Press Secretary
July 9, 2008

THE PRESIDENT: Today the United States Congress passed a vital piece of legislation that will make it easier for this administration and future administrations to protect the American people. This vital intelligence bill will allow our national security professionals to quickly and effectively monitor the plans of terrorists outside the United States, while respecting the liberties of the American people. 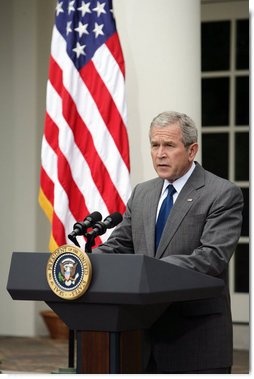 This legislation is critical to America's safety; it is long overdue. Months ago my administration set out key criteria that this intelligence legislation would have to have before I would sign it into law. The Attorney General and Director of National Intelligence report that the bill Congress passed today meets these criteria, and therefore, I will soon sign the bill into law.

This bill will help our intelligence professionals learn who the terrorists are talking to, what they're saying, and what they're planning. It will ensure that those companies whose assistance is necessary to protect the country will, themselves, be protected from lawsuits for past or future cooperation with the government. It will uphold our most solemn obligation as officials of the federal government to protect the American people.

I want to thank the members of my administration who worked hard to get this legislation passed. I thank the Democratic and Republican leadership in the Congress for their efforts, particularly House Majority Leader Hoyer, House Republican Whip Blunt, Senators Bond and Rockefeller, Congressmen Hoekstra, Reyes and Smith.

This legislation shows that even in an election year we can come together and get important pieces of legislation passed.