For Immediate Release
Office of the Press Secretary
July 9, 2008

THE PRESIDENT: Thank you all very much. We've just finished our meetings here in Japan. I would call them very productive.

Our goal was to make progress in five key areas: confronting climate change, reinforcing our commitment to a successful Doha agreement, fighting disease in Africa, ensuring that the G8 nations are accountable for their commitments, and addressing the challenges of high food and energy prices. I'm pleased to report that we've had significant success in all of them. 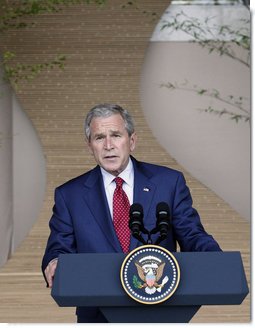 On climate change, I want to thank the Prime Minister for hosting today's meeting of leaders from the world's major economies. In order to address climate change, all major economies must be at the table. And that's what took place today. The G8 expressed our desire to have a -- a significant reduction in greenhouse gases by 2050. We made it clear and the other nations agreed that they must also participate in an ambitious goal, with interim goals and interim plans to enable the world to successfully address climate change. And we made progress, significant progress, toward a comprehensive approach.

One way to meet objectives is to invest in technology, both at the national and international levels, both through the private and public sectors. The United States, Japan, and United Kingdom launched what's called a Clean Technology Fund, and we hope Congress funds that effort. It's a way to help developing nations afford the technologies so that they can become good stewards of the environment.

On other matters, the G8 leaders emphasized the critical importance of concluding a Doha Round. We want the world to trade freely. We want to make sure markets are open for agricultural goods and manufacturing goods and services. We also recognize that the best way to help alleviate poverty is through trade. And so we had good discussions over the past couple of days about successfully completing the Doha Round by the end of this year.

We also made some progress on alleviating sickness in Africa. The G8 committed $60 billion over five years to fight HIV/AIDS and other diseases. I'm also pleased to report the G8 leaders pledged to provide 100 million long-lasting insecticide-treated bed nets by 2010 to help deal with malaria. As you know, the United States has been in the forefront of trying to help nations eradicate malaria, and the G8 nations stepped forward to support our efforts. And I appreciate that very much.

We also committed with partner nations in Africa to train new health care workers. Can't solve health care problems unless there's health care workers on the ground. And the United States is involved with that. And finally, we are working to expand our efforts to treat key neglected tropical diseases, with the goal of reaching 75 percent of victims in the most affected countries in Africa, Asia and Latin America within five years. In other words, we had a comprehensive agenda on helping those who are being affected by disease live healthy lives.

I've always believed to whom much is given much is required. The nations sitting around the table have got much, and I think we're required to help those who don't. Pledges are important. Those have been -- you know, oftentimes in the political process people talk big, but they never follow up. And so one of the key ingredients of these recent meetings was all of us need to be reminded that when we say we're going to do something, we got to do it. And so accountability is an important part of fulfilling our obligations.

We agreed to release detailed reports on our progress in meeting the commitments, breaking down our efforts, country by country, disease by disease. This, of course, will help ensure the G8 initiatives are measurable and transparent, so that we're held accountable for the promises we make.

And finally, we agreed on steps to deal with hunger and high energy prices. We agreed to meet short-term food needs by providing emergency food shipments, and increasing access to fertilizer and seeds, and encouraging other nations to eliminate their export restrictions. We also agreed on steps to relieve hunger in the longer-term, including working to double production of key food staples in several African countries, accelerating access to new agricultural technology such as new seed varieties developed through bio-technology. We're also seeking to increase the amount of food aid supplied by local producers. In other words, instead of the United States just simply giving food, we ought to be buying food from local producers so that they can develop their own agricultural industries, so to help deal with world hunger.

We also agreed that on high energy prices that we got to deal with both on the supply and demand. On the supply side, oil and production refining capacity need to be increased. And the United States needs to do its part. The Democratic leaders in Congress will not allow us to explore for oil and gas in parts of Alaska, offshore America, and now is the time for them to change their mind. We also -- I'm firmly -- believe that we can do this kind of exploration in environmentally friendly ways.

On the demand side, we agreed to take new steps to increase energy efficiency, and we agreed that fuel subsidies that artificially inflate demand should be eliminated or reduced.

In other words, this was a -- you know, a lot of meetings on important subjects, and we accomplished a lot. By protecting our environment and resisting protectionism and fighting disease and promoting development and improving the daily life for millions around the world, we serve both our interests as Americans, and we serve the interest of the world.

We've enjoyed our stay here in Japan. I want to thank the Prime Minister once again for his grand hospitality. And I appreciate you all covering this summit. Thank you very much.