For Immediate Release
Office of the Press Secretary
July 7, 2008

PRESIDENT BUSH: I want to thank the President for a good, meaningful discussion. It's the first time Dmitriy and I met since he has become President of his big country, and we had a good discussion. We talked about Iran; we talked about a variety of issues. And while there's some areas of disagreement, there's also areas where I know we can work together for the common good. 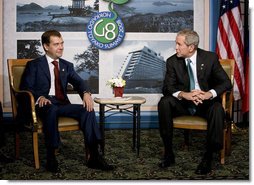 I found him to be a smart guy who understood the issues very well. But I'm not surprised. After all, he has been very close to foreign policy issues up until his ascendency to the presidency. He reminded me of our visit to the White House in 2005, where we discussed foreign policy then. And now I plan on -- discuss it face to face as Presidents of our respective countries.

PRESIDENT MEDVEDEV: (As translated.) Well, indeed, we had this exchange today with George concerning various issues on the agenda of our relationship, including those of domestic importance, trade and investments, and internationally related matters, including those conflicts and crisis tendencies in the world. And true that on certain matters we do have differences originating from the previous background and differences are there. And on the others we have absolutely similar positions. But what is really important, the dialogue is there and there is a commonality of the overview on various things between us.

PRESIDENT BUSH: Everybody has a birthday. Anyway, we'll answer one question apiece.

Q Thank you, Mr. President. You're leaving, he's coming. There's not much time left. Were you able to make any movement? Was there anything that you could accomplish on issues like missile defense? And also, besides his intellect, what else did you see in the new President?

PRESIDENT BUSH: I reminded him that, yes, I'm leaving, but not until six months and I'm sprinting to the finish. So we can get a lot done together and, you know, a lot of important issues. There is -- you know, Iran is an area where Russia and the United States have worked closely in the past and will continue to work closely to convince the regime to give up its desire to enrich uranium.

You know, I'm not going to sit here and psychoanalyze the man, but I will tell you that he's very comfortable, he's confident, and that I believe that when he tells me something, he means it. Sometimes in politics people tell you one thing and mean another. My judgment is that when he tells you something he means it, and that's going to be good for the world leaders to have somebody that -- you may not agree with what he tells you, but at least you know it's what he believes.

Q What is your perspective for the further development of the U.S.-Russia relationship?

PRESIDENT MEDVEDEV: (As translated.) Well, yes, we have discussed these matters on the further development of a relationship between our two countries with George and we are positive that they will develop further on and we will build on the relationship with the new American administration. But we still have six months with the effective administration and we'll try to intensify our dialogue with this administration.

The other thing is that, yes, there are certain questions on our agenda where we agree, and these are the matters pertaining to Iran, North Korea. But then certainly there are others with respect to European affairs and missile defense where we have differences. We would like to agree on these matters, as well, and we also feel very comfortable in our dealings with George.