For Immediate Release
Office of the Press Secretary
July 7, 2008

PRESIDENT BUSH: I'm really pleased to be standing with a really good friend of the American people and a great leader in Africa, President Kikwete of Tanzania. I just -- first of all, I'd like to announce that he's coming to visit in late August. I'm really looking forward to having you to the White House; looking forward to giving you a good dinner. And we'll have a good visit. 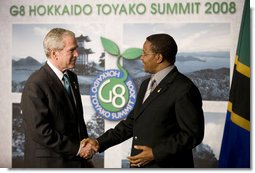 PRESIDENT BUSH: Yes. One of the things that's so impressive about his leadership in Tanzania is that the help of the American people is effective help, measurable in the number of people whose lives are being saved, babies are being helped with malaria. I mean, it's just unbelievable the job you've done there. And we're excited to welcome you to the country. I really want the American people to hear firsthand how successful their generosity has been, whether it be on HIV/AIDS or malaria. And Tanzania is a good example. But this success would not have taken place without your leadership, really important.

The other thing we discussed in the -- we discussed a lot of issues with the African leaders here in the G8, but one, of course, was Zimbabwe. You know, I care deeply about the people of Zimbabwe. I am extremely disappointed in the elections, which I labeled a "sham" election. And we, of course, listened very carefully. And President Kikwete, as the head of the AU, has been very involved in this issue. I'm not going to put words in his mouth, he can express his own self, but it was -- this issue of Zimbabwe took a fair amount of time --

PRESIDENT KIKWETE: It did, it did.

PRESIDENT BUSH: -- and rightly so. Anyway, thank you for agreeing to come to the States, and I'm really looking forward to having you.

PRESIDENT KIKWETE: President, let me thank you for the invitation. I'm really looking forward, too. We enjoyed your visit there. I think I've been around for some time. I think one -- that was one of Tanzania's biggest visits.

PRESIDENT KIKWETE: You saw how people came out into the streets to receive you. It's a measure of our appreciation of what the people of the United States have done to apply assist us in many things. Many lives have been saved through those programs in support of malaria, or to HIV/AIDS, but there are so many other programs that are building our -- capacity of our people to measure -- to marry their own development, which we highly appreciate.

Well, of course we see eye-to-eye on many international issues. Of course we have discussed the issue of Zimbabwe, where we understand your concerns. But I want to assure you that the concerns that you have expressed are indeed the concerns of many of us in the African continent. At the last summit of the African Union, many leaders expressed their dissatisfaction at the way things happened. But also we agreed on the way forward.

The only area that we may differ is on the way forward. You see differently, but for us in Africa we see differently. But I think again, there is still room for us for discussions. We are saying no party can govern alone in Zimbabwe, and therefore the parties have to work together to come up to -- to come out, work together, in a government, and then look at the future of their country together.

PRESIDENT BUSH: Thank you, sir. Looking forward to having you in Washington.

PRESIDENT BUSH: Some of these very same people will be there yelling questions there at the press conference.