For Immediate Release
Office of the Press Secretary
July 4, 2008

THE PRESIDENT: Thank you, and happy Fourth of July. (Applause.) I am thrilled to be here at Monticello. I've never been here before. (Audience disturbance.)

To my fellow citizens to be, we believe in free speech in the United States of America. (Applause.)

For some of you, today will be your first Fourth of July as American citizens. A few moments, you will take part in the 46th annual Monticello Independence Day Celebration and Naturalization Ceremony. When you raise your hands and take the oath, you will complete an incredible journey. That journey has taken you from many different countries; it's now made you one people. From this day forward, the history of the United States will be part of your heritage. The Fourth of July will be part of your Independence Day. And I will be honored to call you a fellow American. (Applause.)

Lieutenant Governor Bill Bolling, the Lieutenant Governor of the state of Virginia -- (audience interruption.) Attorney General Bob McDonnell of the state of Virginia is with us. And all local officials. I appreciate Jim Jones of the U.S. District Court, and other distinguished jurists who are with us today. Thank you for coming. (Audience interruption continues.)

Seems like I brought a lot of -- (Audience interruption continues.)

Most of all, I'm glad you're here. And we welcome you and your families, and we're honored to be celebrating with you this joyous occasion. (Applause.)

You know, long before anyone had ever heard of Crawford, Texas, Charlottesville, Virginia was the home to the first Western White House. The majesty of this home is a monument to the genius of Thomas Jefferson. Every hundreds of years -- every year, thousands of visitors come here. And I think today it's fitting to thank the men and women of the Thomas Jefferson Foundation for preserving this historic treasure. (Applause.)

You just can't help but marvel at Thomas Jefferson's many accomplishments. As a scholar, few were better read. He was known to have read five books at a time on a revolving book stand. Later in life he founded a public university that has become one of the nation's finest -- the University of Virginia. (Applause.)

As a statesman, Thomas Jefferson held all three top posts in the executive branch. He served as the first Secretary of State, the second Vice President, and the third President. Not bad for a man who hated public speaking. (Laughter.) It seems Jefferson got away with only delivering two public speeches during his presidency. I'm sure a lot of Americans wish that were the case today. (Laughter.)

In a life full of accomplishments, Thomas Jefferson was especially proud of the Declaration of Independence. Looking back 232 years later, it's easy to forget how revolutionary Jefferson's draft was. (Audience interruption.)

At the time, some dismissed it as empty rhetoric. They believed the British Empire would crush the 13 colonies in the field of battle. And they believed a nation dedicated to liberty could never survive the world ruled by kings. (Audience interruption continues.)

Today we know history had other plans. After many years of war, the United States won its independence. The principles that Thomas Jefferson enshrined in the Declaration became the guiding principles of the new nation. And at every generation, Americans have rededicated themselves to the belief that all men are created equal, with the God-given right to life, liberty, and the pursuit of happiness. (Applause.)

Thomas Jefferson understood that these rights do not belong to Americans alone. They belong to all mankind. And he looked to the day when all people could secure them. On the 50th anniversary of America's independence, Thomas Jefferson passed away. But before leaving this world, he explained that the principles of the Declaration of Independence were universal. In one of the final letters of his life, he wrote, "May it be to the world, what I believe it will be -- to some parts sooner, to others later, but finally to all -- the Signal of arousing men to burst the chains, and to assume the blessings and security of self-government."

We honor Jefferson's legacy by aiding the rise of liberty in lands that do not know the blessings of freedom. And on this Fourth of July, we pay tribute to the brave men and women who wear the uniform of the United States of America. (Applause.)

We also honor Jefferson's legacy by welcoming newcomers to our land. And that is what we're here to celebrate today. (Audience interruption.)

Throughout our history, the words of the Declaration have inspired immigrants from around the world to set sail to our shores. (Interruption continues.) These immigrants have helped transform 13 small colonies into a great and growing nation of more than 300 [sic] people. They've made America a melting pot of cultures from all across the world. They've made diversity one of the great strengths of our democracy. And all of us here today are here to honor and pay tribute to that great notion of America. (Applause.) 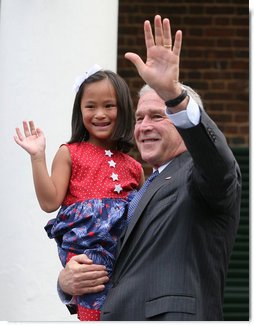 Those of you taking the oath of citizenship at this ceremony hail from 30 different nations. You represent many different ethnicities and races and religions. But you all have one thing in common -- and that is a shared love of freedom. This love of liberty is what binds our nation together, and this is the love that makes us all Americans.

One man with special appreciation for liberty is Mya Soe from Burma. As a member of the Shan ethnic group, Mya faced discrimination and oppression at the hands of Burma's military junta. When he tried to reach local villagers -- when he tried to teach local villagers how to read and write the Shan language, the regime interrogated him and harassed him. In 2000, he left a life of fear for a life of freedom. He now works as a painter in the Charlottesville community. Today we welcome this brave immigrant as a citizen-to-be of the United States of America. (Applause.)

I'm sure there are other stories like Mya's among you. But we must remember that the desire for freedom burns inside every man and woman and child. More than two centuries ago, this desire of freedom was -- had inspired the subjects of a mighty empire to declare themselves free and independent citizens of a new nation. Today that same desire for freedom has inspired 72 immigrants from around the world to become citizens of the greatest nation on Earth -- the United States of America. (Applause.)

I congratulate you. I welcome you. I wish you all a happy Fourth of July. Thanks for inviting me. May God bless you, and may God continue to bless the United States of America. (Applause.) 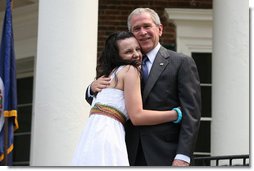