For Immediate Release
Office of the Press Secretary
July 3, 2008

THE PRESIDENT: Yesterday I had the opportunity to speak to President Uribe of Colombia, and he called to give me the good news that hostages had been rescued, including three Americans that had been held since 2003. I congratulated the President. I asked him to congratulate his military and those who had planned it. And I told him what a joyous occasion it must be to know that the plan had worked, that people who were unjustly held were now free to be with their families. 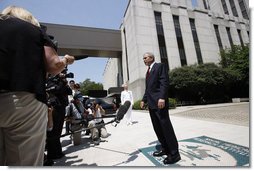 So I'm proud of our relationship with Colombia, and I'm proud of my friend, President Uribe. I appreciate his courage and his strong leadership and the successful operations they waged.