For Immediate Release
Office of the Press Secretary
July 3, 2008

THE PRESIDENT: Thank you very much, Deputy Secretary England, for that generous introduction. I am so honored to be here at Bethesda National Naval Medical Center. This is often called the "President's Hospital." The reason why is this is where the President gets medical care. But I'm relieved today not to be on the treadmill, weighing in and getting a blood test. (Laughter.) I also will tell you that the care that the President gets here is extraordinary.

I am so excited to be here for what is a grand occasion. This is a big deal, the breaking ground of a new joint medical facility for the men and women of our Armed Forces. Thank you all for joining us. 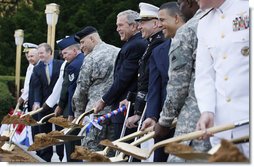 In a few years the current campus at Walter Reed will close, and many of its services will be relocated to the new complex here on the grounds at Bethesda. The two hospitals will be merged into one central campus, which will be called the Walter Reed National Military Medical Center. At this new center, wounds will be healed, medical knowledge will be advanced, lives will be rebuilt. And those who wear our nation's uniform will be reminded that they have the enduring gratitude of the American people. I thank all who serve Walter Reed and Bethesda. I love being with the healers and caregivers, and incredibly compassionate people who makes our current facility successful and will make this new center a great success.

Congressman, thank you very much for joining us. I know you are proud that this new facility is in your congressional district. Thank you for working hard to see vision become a reality.

Lieutenant Governor, proud to be with you. This man wear [sic] the uniform of the United States military, and I'm proud to be with this veteran, and now public servant for the state of Maryland.

Members of the administration who are here, thank you all for coming. Chaplain York, thanks for the blessings. And all those who wear the uniform, thanks for sacrificing for the country.

This morning, we gather in a place that was chosen by another President to be the site of a world-class naval hospital. When President Franklin Roosevelt dedicated Bethesda in the early years of World War II, he placed this facility on the front lines of what he called the "battle against disease, disability and death." The military "surgeons and nurses, scientists and technicians," he said, "are anonymous heroes of this war."

More than six decades later, our nation is engaged in a very different battle for our freedom. Yet our success still relies on these "anonymous heroes" -- the healers who care for the troops, those troops who keep the American people safe. In this new war, giving our troops the care they deserve requires cutting-edge medical facilities. And that is what this new medical center will provide.

When the construction is complete, this facility will encompass 345 beds and 6.7 million square feet. It will join the resources of the Army, Navy, and Air Force, and make it easier for medical professionals in all three services to collaborate and care for the patients. Our troops and their families will no longer have to travel between Bethesda and Walter Reed to see multiple specialists. The new complex will also benefit from the good work of the Dole-Shalala Wounded Warriors Commission, which has issued recommendations for modernizing and improving our military health care system. Those recommendations will provide a strong foundation for effective, accountable care here at the new Walter Reed National Military Medical Center.

This new medical center will be a place of healing. Every day, our military doctors and nurses and medical staff demonstrate their immense skill and their caring hearts. You soothe the pain and fear of patients. You console families who keep constant vigil over their loved ones. You share the joy of a neurology patient's first recovered words, and an amputee's first steps. When required, you can show tough love -- but you also like to remind patients that laughter is the best medicine. And we look forward to the day when the joy of recovery echoes through the halls of the new medical facility that will be built here.

This new medical center will be a place of innovation. Major Walter Reed was the Army doctor who found that Yellow Fever is transmitted by mosquitoes -- a discovery that has saved countless lives. The new institution bearing his name will continue his legacy of lifesaving research. Today, our nation's military doctors are revolutionizing how we approach traumatic brain injuries, Post-Traumatic-Stress Disorder, and amputee care. In many fields, you are far ahead of civilian medicine. And when Bethesda and Walter Reed merge into one campus across from the National Institutes of Health, this will be the site of many more promising breakthroughs that will benefit not only our troops, but all mankind.

This new medical center will be a place of compassion. At Bethesda and Walter Reed, volunteers organize holiday celebration, poker nights and field trips. They distribute care packages from thousands of Americans who want to show their gratitude for our troops. Recently, schoolchildren from New York made pillows for soldiers at Walter Reed, and sent letters along with the gifts. The children wrote: "[You are] everyone's hero." "Thank you for fighting for our freedom." At this new center, the Americans who fight for our freedom will get the compassion and support they deserve.

This new medical center will be a place of courage. Our wounded warriors show that while the human body is fragile, the human spirit is strong. Anybody who has met the wounded at Walter Reed and Bethesda cannot help but be incredibly impressed by the courage and sacrifice of our troops.

Recently, I saw this strength in a young Air Force Staff Sergeant named Scott Lilley. Scott was serving in Iraq when an IED left him with a severe brain injury. I think it was last 4th of July that you came to the White House. Yes, I was one who felt like this guy had no chance. And yet, he -- the doctors here used state-of-the-art technology and aggressive treatment to get Scott better. Their perseverance paid off. And so has his. I welcomed he and his mom and dad to the Oval Office the other day. He was more eloquent than I was, which isn't all that hard. (Laughter.) He drives a car, he goes to baseball games, he loves to joke.

His doctor calls Scott's recovery "miraculous." And thanks to the extraordinary care he received at Bethesda, as well his own extraordinary resolve, he is now back on active duty in the Air Force. And we are glad you're here. (Applause.)

The greatest privilege of serving as President is to be the Commander-in-Chief of such an extraordinary group of men and women who wear our nation's uniform. And I'm pleased to help start construction on the new hospital that will continue to provide the excellent care our troops deserve. It is fitting that this new facility be built in a place called Bethesda, which draws its name from the Biblical pool of healing. It is there that a lame man was made to walk, and was dispatched with the words: "Behold, thou art made whole."

I pray that this will be the site of many miracles of healing -- where the lame will walk again, where broken bodies will be made whole, and where you'll always know that you're in our prayers and in the hearts of the American people.

May God bless you, and may God continue to bless our country. (Applause.)