For Immediate Release
Office of the Press Secretary
June 26, 2008

THE PRESIDENT: Good morning. The policy of the United States is a Korean Peninsula free of all nuclear weapons. This morning, we moved a step closer to that goal, when North Korean officials submitted a declaration of their nuclear programs to the Chinese government as part of the six-party talks.

The United States has no illusions about the regime in Pyongyang. We remain deeply concerned about North Korea's human rights abuses, uranium enrichment activities, nuclear testing and proliferation, ballistic missile programs, and the threat it continues to pose to South Korea and its neighbors. 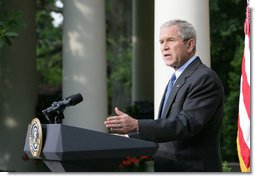 Yet we welcome today's development as one step in the multi-step process laid out by the six-party talks between North Korea, China, Japan, Russia, South Korea, and the United States.

Last year, North Korea pledged to disable its nuclear facilities. North Korea has begun disabling its Yongbyon nuclear facility -- which was being used to produce plutonium for nuclear weapons. This work is being overseen by officials from the United States and the IAEA. And to demonstrate its commitment, North Korea has said it will destroy the cooling tower of the Yongbyon reactor in front of international television cameras tomorrow.

The six-party talks are based on a principle of "action for action." So in keeping with the existing six-party agreements, the United States is responding to North Korea's actions with two actions of our own:

First, I'm issuing a proclamation that lifts the provisions of the Trading with the Enemy Act with respect to North Korea.

And secondly, I am notifying Congress of my intent to rescind North Korea's designation as a state sponsor of terror in 45 days. The next 45 days will be an important period for North Korea to show its seriousness of its cooperation. We will work through the six-party talks to develop a comprehensive and rigorous verification protocol. And during this period, the United States will carefully observe North Korea's actions -- and act accordingly.

The two actions America is taking will have little impact on North Korea's financial and diplomatic isolation. North Korea will remain one of the most heavily sanctioned nations in the world. The sanctions that North Korea faces for its human rights violations, its nuclear test in 2006, and its weapons proliferation will all stay in effect. And all United Nations Security Council sanctions will stay in effect as well.

The six-party process has shed light on a number of issues of serious concern to the United States and the international community. To end its isolation, North Korea must address these concerns. It must dismantle all of its nuclear facilities, give up its separated plutonium, resolve outstanding questions on its highly enriched uranium and proliferation activities, and end these activities in a way that we can fully verify.

North Korea must also meet other obligations it has undertaken in the six-party talks. The United States will never forget the abduction of Japanese citizens by the North Koreans. We will continue to closely cooperate and coordinate with Japan and press North Korea to swiftly resolve the abduction issue.

This can be a moment of opportunity for North Korea. If North Korea continues to make the right choices, it can repair its relationship with the international community -- much as Libya has done over the past few years. If North Korea makes the wrong choices, the United States and our partners in the six-party talks will respond accordingly. If they do not fully disclose and end their plutonium, their enrichment, and their proliferation efforts and activities, there will be further consequences.

Multilateral diplomacy is the best way to peacefully solve the nuclear issue with North Korea. Today's developments show that tough multilateral diplomacy can yield promising results. Yet the diplomatic process is not an end in itself. Our ultimate goal remains clear: a stable and peaceful Korean Peninsula, where people are free from oppression, free from hunger and disease, and free from nuclear weapons. The journey toward that goal remains long, but today we have taken an important step in the right direction.

I'll take a couple of questions.

THE PRESIDENT: I knew that the United States could not solve, or begin to solve, this issue without partners at the table. In order for diplomacy to be effective, there has to be leverage. You have to have a -- there has to be consequential diplomacy.

And so I worked hard to get the Chinese and the South Koreans and the Japanese and the Russians to join with us in sending a concerted message to the North Koreans, and that is, that if you promise and then fulfill your promises to dismantle your nuclear programs, there's a better way forward for you and the people. In other words, as I said in the statement, it's action for action.

It took a while for the North Koreans to take the six-party talks seriously, and it also took there to be concerted messages from people other than the United States saying that if you choose not to respond positively there will be consequences.

And so I'm -- it's been a -- multilateral diplomacy is difficult at times. It's hard to get people heading in the same direction, and yet we were able to do so along -- our partners helped a lot, don't get me wrong.

The message to the North Korean people is, is that we don't want you to be hungry; we want you to have a better life; that our concerns are for you, not against you; and that we have given your leadership a way forward to have better relations with the international community. This is a society that is regularly going through famines. When I campaigned for President, I said we will never use food as a diplomatic weapon. In North Korea, we have been concerned that food shipments sometimes don't make it to the people themselves -- in other words, the regime takes the food for their own use.

So my message to the people is, is that we'll continue to care for you and worry about you, and at the same time, pursue a Korean Peninsula that's nuclear weapons free. And today we have taken a step, and it's a very positive step, but there's more steps to be done.

Q Mr. President, what do you say to critics who claim that you've accepted a watered-down declaration just to get something done before you leave office? I mean, you said that it doesn't address the uranium enrichment issue, and, of course, it doesn't address what North Korea might have done to help Syria build its reactor.

THE PRESIDENT: Well, first, let me review where we have been. In the past, we would provide benefits to the North Koreans in the hope that they would fulfill a vague promise. In other words, that's the way it was before I came into office.

Everybody was concerned about North Korea possessing a nuclear weapon; everybody was concerned about the proliferation activities. And yet the policy in the past was, here are some benefits for you, and we hope that you respond. And, of course, we found they weren't responding. And so our policy has changed, that says, in return for positive action, in return for verifiable steps, we will reduce penalties. And there are plenty of restrictions still on North Korea.

And so my point is this, is that -- we'll see. They said they're going to destroy parts of their plant in Yongbyon. That's a very positive step -- after all, it's the plant that made plutonium. They have said in their declarations, if you read their declarations of September last year, they have said specifically what they will do. And our policy, and the statement today, makes it clear we will hold them to account for their promises. And when they fulfill their promises, more restrictions will be eased. If they don't fulfill their promises, more restrictions will be placed on them. This is action for action. This is we will trust you only to the extent that you fulfill your promises.

So I'm pleased with the progress. I'm under no illusions that this is the first step; this isn't the end of the process, this is the beginning of the process of action for action. And the point I want to make to our fellow citizens is that we have worked hard to put multilateral diplomacy in place, because the United States sitting down with Kim Jong-il didn't work in the past. Sitting alone at the table just didn't work.

So today I'm just talking about the first step of a multi-step process. And I want to thank our partners at the six-party talks. It's been incredibly helpful to achieve -- the beginnings of achieving a vision of a nuclear-free Korean Peninsula to have the Chinese to be as robustly involved as they are. You notice that the North Koreans passed on their documents to the Chinese; after all, we're all partners in the six-party talks.

The other thing I want to assure our friends in Japan is that this process will not leave behind -- leave them behind on the abduction issue. The United States takes the abduction issue very seriously. We expect the North Koreans to solve this issue in a positive way for the Japanese. There's a lot of folks in Japan that are deeply concerned about what took place. I remember meeting a mother of a child who was abducted by the North Koreans right here in the Oval Office. It was a heart-wrenching moment to listen to the mother talk about what it was like to lose her daughter. And it is important for the Japanese people to know that the United States will not abandon our strong ally and friend when it comes to helping resolve that issue.

Today is a positive day; it's a positive step forward. There's more work to be done, and we've got the process in place to get it done in a verifiable way.