For Immediate Release
Office of the Press Secretary
June 26, 2008

THE PRESIDENT: The 4th of July is fast approaching, and Democratic leaders in Congress have scheduled another recess. Americans are concerned that Congress may leave town with a lot of important business that hasn't been completed.

Before they leave, the Congress needs to pass an emergency war funding bill, so that our troops on the frontlines have the tools they need to protect themselves and us. The House passed a good bill, and now the Senate needs to act. 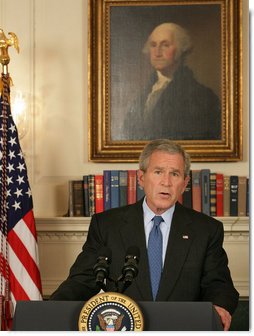 Before they leave, Congress needs to give our intelligence professionals the tools they need to act quickly and effectively to monitor foreign terrorist communications so we can stop any new attack. The House passed a good, very good bipartisan bill, and the Senate needs to act.

Before they leave, the Senate needs to make progress on the enormous backlog of nominations that they've held up. Many of these nominations are for vital positions affecting our courts, our economy, our public safety, and our national security. Every day that these nominees are delayed makes it harder for the government to meet its responsibilities, and the Senate needs to act right away.

And finally, the Congress needs to act when it comes to the Colombia free trade agreement. This is a good deal for our economy. It will help our economy grow and to strong -- support our friend and ally in the neighborhood, Colombia.

I'm -- I asked the Democratic leaders to make the last two days before their recess productive. I, of course, wish the members to have a great 4th of July week, and I'm looking forward to working with them to address critical issues facing our nation when they return.