For Immediate Release
Office of the Press Secretary
June 25, 2008

PRESIDENT BUSH: Mr. Ambassador, it's good to see you again. Thank you very much for bringing your colleagues from the United Nations Security Council. First, I want to thank you all very much for serving your respective countries. And thank you for being voices for peace and freedom.

We've had a really good discussion. We talked about a U.N. Security Council role for Darfur and Burma. We talked a little bit about Iran and how the United Nations Security Council is sending a focused message that the world really offers Iran a better way forward than isolation if they will verifiably suspend their enrichment programs. 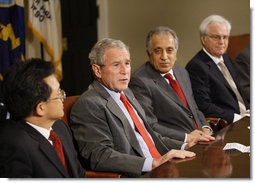 And then we talked about Zimbabwe. Friday's elections, you know, appear to be a sham. You can't have free elections if a candidate is not allowed to campaign freely and his supporters aren't allowed to campaign without fear and intimidation. Yet the Mugabe government has been intimidating the people on the ground in Zimbabwe. And this is an incredibly sad development.

I hope that the EU -- I call -- AU will, at their meeting this weekend, continue to highlight the illegitimacy of the elections; continue to remind the world that this election is not free and it's not fair.

I want to thank very much the leaders in the region, those who have stepped up and spoke clearly, I appreciate them doing every -- taking their responsibility seriously. And I want to thank the members here around the table of the United Nations Security Council for your strong presidential statement. It was a powerful statement for fairness and decency and human dignity. And I suspect you'll still be dealing with this issue. And as you do, I hope you continue to speak with the same clarity that you spoke with last Monday.

People of Zimbabwe deserve better than what they're receiving now. People there want to express themselves at the ballot box, yet the Mugabe government has refused to allow them to do so. This is not just, and it is wrong.