For Immediate Release
Office of the Press Secretary
June 25, 2008

PRESIDENT BUSH: It's been my honor to welcome a friend, President Talabani, back to the Oval Office. He is the President of a free Iraq. He is a man who's been on the front lines of helping to unify Iraq and to help Iraq recover from a brutal regime -- that of Saddam Hussein. 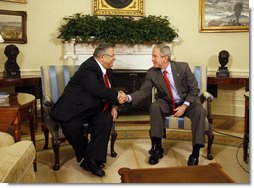 There's still a lot of work to be done, we recognize that. We talked of a variety of subjects. We talked about a strategic framework agreement that suits the Iraq government. We talked about elections and different laws that have been passed. I did compliment the President on working hard to see to it that the legislative session this year has been very successful. We talked about the fact that the economy is improving, and that the attitude of the people there has improved immeasurably over the years.

And so I welcome you here. I'm proud of what you've done, and I thank you for the tough decisions, so that the people of a free Iraq can realize hopes and dreams. Welcome.

PRESIDENT TALABANI: Well, I am proud to have the honor of meeting President George Bush, whom we consider the liberator of Iraq from the worst kind of dictatorship, as a great friend of the Iraqi people. I'm grateful for what he said about me, but I agree with him that we are going to work together for having this agreement -- security agreement between the United States and Iraq, and also to continue our cooperation in our struggle against terrorism, for promotion of democracy in Iraq and Middle East.

We are proud to have such a good friend here in this great country, and I think we can -- I can say that we can pass this year two important laws, oil and election. And we are now going to reunite our government by bringing -- (inaudible) -- to the United Assembly representatives, to the Iraqi National Unity government headed by our Prime Minister, Nouri Maliki.

I also briefed our good friend about the achievements which Iraq had done in struggle against terrorism and, again, militias, who were making troubles for Iraq and threatening civil war. Now I can say that Iraq -- big part of Iraq is stable and is secure and liberated from the danger of terrorism and militia.

Yes, some places still there are some groups that remain here and there, but I think big achievement we have done this year with the support of the United States Army and government, and with the friendly advices from President Bush. I can say that we are proud to achieved good successes in Iraq, and our economy is growing.

We have also -- big steps forward for national reconciliation. We improved our relation with our neighbors -- with Turkey, with Egypt, with Jordan, with Kuwait. We normalized our relation with Iran and with Syria, also. So Iraqi government is now going to play its role in the Arab world as one -- a founder of the Arab League. And there is no -- I think no more, any kind of isolation of our government.

And again to thank -- here I am again to thank here our great friends, President Bush and American people, for their sacrifice and their support for the Iraqi people. Thank you very much.