THE PRESIDENT: Thank you all. Please be seated. (Applause.) Welcome to the White House. It is an honor to be here with so many fine student athletes, now known as national champs. (Applause.)

It seems like the South Lawn is a fitting place to hold Champions Day. After all, we have a swimming pool, a tennis court, a running track, a putting green, and a basketball court -- just in case any of our athletes here want to squeeze in a little friendly competition. (Laughter.) 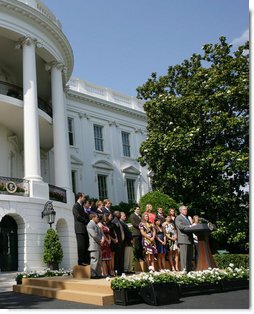 I appreciate the fact that you showed incredible discipline, skill, perseverance. It's hard to become a champ, and that's why we love to honor people here at the White House when you become one. And one of the things I tell people is, is that if you work hard and become a repeat champion, I look forward to welcoming you back to the White House. However, this time it's not going to work. My eligibility has run out. (Laughter.) But I do wish you all the very best, so the next President can welcome you to the White House. But in the meantime, we're going to honor the folks here today.

I welcome the members of the Cabinet. Mr. Secretary, thanks for coming. Members of Congress, thank you all for being here. United States Senators, United States Congressmen, student athletes, coaches, school officials, and fans.

Today we honor 20 teams from 15 campuses and 13 states. These athletes excel from tee boxes in California to ski slopes in Colorado, to parallel bars in Oklahoma, to bowling alleys on Maryland's Eastern Shore. You're represented by a wide variety of mascots -- the Orange and the Golden Bears, the Hawks, the Eagles, and the Ducks, the Bruins, the Buckeyes, and two different types of Bulldogs. (Applause.) Despite these differences, you all share the right to call -- be called "champs," a title you'll keep for the rest of your life.

We have two first-time champions here today -- UCLA Women's Tennis -- (applause) -- and the University of Maryland-Eastern Shore Women Bowling Hawks. (Applause.) We have two teams that have spent a long time waiting to reclaim their national crowns: The University of Oregon Men's Cross Country team brought the national title to Eugene for the first time in 30 years. (Applause.) I know you're proud, Senator. And the UCLA Men's Golf Bruins earned their first national championship in 20 years. (Applause.)

Even more impressive than winning the national title is becoming a repeat champion. Some of the teams here have accomplished that feat: Cal's Men Water Polo team, University of Tennessee Women's Basketball, University of Georgia Men's Tennis -- they're all repeat champs. Congratulations to you. (Applause.)

And then we've got two teams that have achieved the rare "four-peat" -- the University of Georgia Women's Gymnastics, affectionately known as the "Gym Dogs." (Applause.) And two senators are here to honor them. (Applause.) UCLA Women's Water Polo Bruins are here. (Applause.) 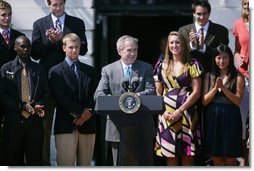 On the road to the championship some teams recorded particularly memorable achievements. The University of North Carolina Women's Field Hockey team compiled a perfect 24-0 record -- (applause) -- making them just the fifth team in the sport history to - sport's history to finish undefeated. Penn State Men's Volleyball and Penn State Women's Volleyball pulled off a rare double championship, winning both the men's and women's title in the same year. (Applause.) Charlie Dent is here, representing the team. (Applause.)

The University of Denver Men's and Women's Ski Team competed with one fewer skier than their rivals, making them only the second ski team in NCAA history to win the title shorthanded. And we congratulate you. (Applause.)

The USC Women's Golf Team set a school record with five All-Americans on their championship team. (Applause.) And all five just yelled. (Laughter.)

Some of the champs here are building on long legacies of excellence. Ohio State Men's and Women's Fencing finished in the top five for the seventh consecutive year and earned the third fencing championship in school history. And we welcome you here. (Applause.)

Boston College Men's Ice Hockey -- (applause) -- prevailed in the Frozen Four for the third time in school history, and the second time in this decade.

The University of Minnesota-Duluth Women's Ice Hockey Bulldogs -- (applause) -- earned their fourth championship in the past eight years. It's good to see you again.

The University of Oklahoma Men's Gymnastics upset the top seed to win their fifth national title in the past seven years. And the Syracuse Men's Lacrosse team claimed their 10th national championship, which sets a new NCAA lacrosse record. (Applause.)

We honor you all, and we welcome you to the White House. And as importantly, we thank you for your contributions to the communities in which you live. These athletes have volunteered at food banks during holidays; they have visited schools to inspire children with disabilities; they've encouraged literacy and good health; they've raised money to fight cancer. What I'm telling you are -- is they're great athletes and good citizens. And for that, our country is grateful. We're glad that you're here. We congratulate you and your families and your schools for your achievements. We ask for God's blessings on you and on our country.

Thank you for coming. (Applause.)