For Immediate Release
Office of the Press Secretary
June 23, 2008

THE PRESIDENT: Thanks for coming. Please be seated. Welcome to the White House. And it is fitting that we use the East Garden because, one, this is rarely used; and two, it is an opportunity for me to welcome a lot of people to the -- that are here to see the WNBA champs, Phoenix Mercury. And we're glad you came. (Applause.)

People who follow sport in America will know that the Phoenix Mercury played together as a great team, and they brought new glory to women's athletics and the sport of basketball. As they like to say, "Mighty Mercury, we are number one!" (Laughter.) And these women proved it. 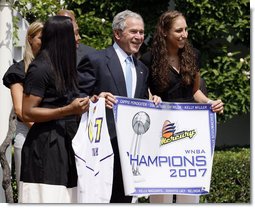 I want to thank Jay Parry, President and COO of the Phoenix Mercury, for joining us. Ann Meyers Drysdale, the General Manager of Phoenix Mercury. Where is your son? There he is. Kind of looks like the big right-hander. You're right. (Laughter.)

Corey Gaines, the head coach -- Coach, thanks for coming, proud you're here. I particularly want to pay my respects to the co-captains of the team, Cappie Pondexter and Diana Taurasi.

Now, this is not the first time that Diana has been here to the White House. She came with the mighty UConn Huskies. And she told me she was going to amount to something in life when I saw her. (Laughter.) She said, "I will be back," and she is, as the champion. Welcome. Glad you're here.

And I wish these two -- these two great athletes all the best at the Olympics in Beijing. They're going to be carrying on the great tradition of women's basketball here in the United States. And even though it's going to be tough, a lot of teams are getting ready for them, they're going to come back with the Gold and America will be proud. (Applause.)

I welcome the other athletes on the stage and the newly -- the new athletes who have joined the Phoenix Mercury. Must be pretty cool to be playing with champs. I bet it's wearing off on you, what it means to make the sacrifices necessary to win the title and be invited here in the White House.

I want to welcome Congressman Trent Franks -- Congressman, thanks for coming. Thanks for taking an interest in the Phoenix Mercury. I know they're proud to have your support.

I welcome members of the Junior WNBA that have joined us. Thanks for coming, thanks for taking an interest in women's basketball. (Applause.) I want to -- do thank -- do want to thank the WNBA representatives and personnel who've joined us; appreciate you promoting women's athletics. As the father of twin girls, there's nothing better than having good role models for girls to look at, and there are no better role models than women basketball players. They're great athletes. They're well-conditioned people. They're disciplined.

I want to welcome the Phoenix fans here, professionally known as the "X-factor." I know these women really love the fact that they play in a city that supports them. And I hope the fans that, you know, aren't here recognize that even here in Washington D.C. we've heard of the Phoenix Mercury, and proud to -- proud to have them come. 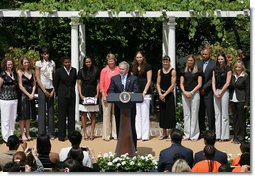 The team's playoff slogan was, "One team, one city, one goal." And they've fulfilled the goal. You became the first WNBA team in history to win the championship on the road. For the second year in a row, you set the record for the highest scoring average in WNBA history.

You were led ably by Coach Paul Westhead. I know he is proud of the women. And Corey Gaines was the assistant coach, so he had the pleasure of being part of a championship program, and he knows what it takes to get you in a position where you can win this year, as well. Of course, I'm not going to be around to welcome you -- but play hard anyway. (Laughter.)

The thing I love about this team and a lot of champions that I get to recognize here at the White House is the fact that they understand you're a champ on the courts, and you're a champ off the courts. The -- this team spent weekends on a Habitat for Humanity program called, "Women Build." They served meals at homeless shelters. They honored breast cancer survivors. They helped sign up runners for Race for the Cure. They collected water bottles from fans and donated them to the Salvation Army's Extreme Heat Emergency Project. They participated in Read to Achieve. They helped stuff backpacks with supplies for underprivileged children.

They support the junior WNBA program, fully understanding that promoting healthy lifestyles is good for America, and there's no better way to have a healthy lifestyle than to participate in athletics. They've done their duty as citizens of the United States. I'm honored to welcome you. I'm proud of your championship trophy. I thank you for what you do for the country. May God bless you all. (Applause.)

MS. MEYERS DRYSDALE: Mr. President, on behalf of the 2007 WNBA Champion Phoenix Mercury, we'd like to thank you for your invitation to the White House. The Phoenix Mercury and the WNBA is all about leadership, being a strong role model, teamwork, and making a difference in other's lives.

This team accomplished a lot last year and had a lot of firsts. The coaches, fans and players never stopped believing in themselves. Mr. President, we know your support for the Phoenix Mercury is genuine, because of the influence of the women in your life. 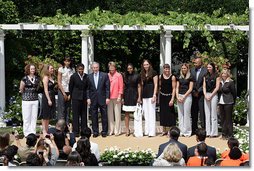 THE PRESIDENT: Yes, that's why my hair is white. (Laughter.)

MS. MEYERS DRYSDALE: We are very proud of this team. And on behalf of the Phoenix Mercury, we'd like our two Olympians, Diana Taurasi and Cappie Pondexter, to present you with a Phoenix Mercury jersey and a replica banner of our championship. (Applause.)