For Immediate Release
Office of the First Lady
June 23, 2008

I want to acknowledge Representative Steve Adams, the Minority Leader of the Vermont House of Representatives. Thank you very much, Steve, and Jean, for joining us today. Representative Alison Clarkson from the Vermont House of Representatives -- thank you, Alison, for all your good work for parks here. The Superintendent here of Marsh-Billings-Rockefeller National Historical Park, Rolf Diamant, thank you very much. Rolf has been the Superintendent of this park since it opened for 10 years. And imagine how terrific that would be to be able to build a park like he has. And that's what's so terrific about our National Park System, is we have our old fabulous parks that were founded over 100 years ago, or protected areas over 100 years ago, and we have our new parks as well. 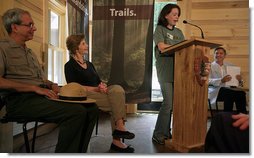 David Donath, thank you very much, from the Woodstock Foundation. Thank you for your partnership with this park. And Vin Cipolla, who's been terrific as the National Park Foundation Board President. And he's just been so great and really doing a lot of great things like being able to give these sort of $50,000 grants to parks around the country.

Regan Gammon, who is the Citizen Chair -- Vice Chair of the National Park Foundation is here with me. And Regan and my other friends that are here with me -- Jane Ann, Marge and Peggy -- and I all grew up together in Midland, Texas, and we hike together every summer. And Rachel, we like to do just what you like to do. We like to splash through streams and we like to get up in the middle of the night and look at stars when we're on the -- in great big national parks where it's very dark and you can see really great stars at night.

We started hiking together for our 40th birthday by going down the Colorado River in the Grand Canyon and then hiking the 10 miles out. And in the years since -- and I won't tell you how many years since -- (laughter) -- we've visited all of -- or many of our great Western national parks: Yosemite, Glacier, Yellowstone, Denali -- is there someone named Denali over there? (Laughter.) Are you named for the national park? You are? I thought -- I wondered if you were. Olympic National Park -- many, many others. But this is our first year to choose to hike on an Eastern -- one of our Eastern parks, and we're starting here at Marsh-Billings and then we're going on to Acadia National Park to hike there. 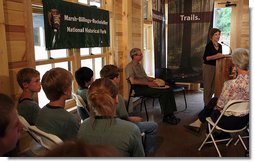 The mountains on this side of the country may not be as tall as those on the other side, but it's easy for us to see from our surroundings that this scenery is every bit as grand as those Western parks. And actually, as we've gotten older, these smaller mountains are more -- (laughter) -- more appropriate for our hiking.

Long before conservation or sustainability became popular terms, Frederick Billings and his family were putting it into practice on this land. Today, Marsh-Billings-Rockefeller National Historical Park is the oldest sustainably managed forest in the United States. And the new Forest Center, which we're in at this very moment, that will officially open in August, is the first National Park Service structure to be built entirely from lumber from a certified sustainable forest. Everything in here -- the only thing that is not local are the cedar shingles on the outside, and that's because there is not cedar in this forest.

The park's new permanent exhibit -- The Mount Tom Forest: A Legacy of Stewardship -- will tell the story of sustainable forestry as it's uniquely written here across these lands.

President Bush has the President's National Park Centennial Initiative, which is challenging individuals and corporations and foundations and the private sector to make a personal investment in park improvements. And today's event, which is held on this donated land, exemplifies how public -- private philanthropy has always been a mainstay of our public lands, and especially in the park system. 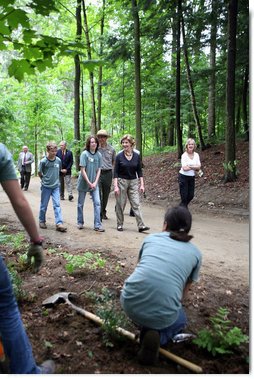 As the federal government increases its support of the parks, the Centennial Initiative will also inspire anew a sense of private responsibility for our public lands. This morning I got to see these young people who are committed to the parks by working to improve the network of pathways and trails and carriage roads here at Marsh-Billings-Rockefeller. Students who are engaged in service-learning activities like these -- like the camp provides for them and from SCA and the Vermont Service Organization -- are more likely to do well in school and to have strong social skills. These students are also more likely to continue service and civic involvement as adults. And they're more likely to grow up with a love of time spent outdoors in America's national parks.

The National Park Foundation's new Active Trails! program will help expand community involvement in the trails initiative through the grant that Vin just announced to the Marsh-Billings-Rockefeller National Historical Park. This funding will support the park and the Woodstock Foundation as they work to connect the park's trails with the town of Woodstock and with the Appalachian Trail. And it will help revitalize the aptly named "Stewardship Trail" this summer, because a lot of volunteers, like these young people, will be working on that trail.

Our national parks give Americans the chance to hike, swim, camp, explore, and, most important, create lasting memories with families and friends, and that's certainly what we've done with each other in our many years of hiking together. And finally, one year we did break down and invite our girls -- (laughter) -- along with us. We did that Grand Canyon trip again a few years ago with -- all of us have girls, some of us have boys, too; some of them have boys -- but it was a mother and daughter trip, and it was really fun -- really fun to get to be with them and show them what it was like. And then they said, "Now, are we going to get to go next year?" And we said, "No." (Laughter.) But they all hike and camp themselves, and really not because we took them hiking and camping so much but because they saw us do it and knew how much it meant to us. And so that's what they're doing with their friends.

In fact, Acadia National Park, where we're going to go tomorrow, has a very special and romantic spot in our hearts because that's where our son-in-law, Henry, asked Jenna to marry him, on the top of Cadillac Mountain, at sunrise, in the very first spot that the sun shines on the United States. So, isn't that so sweet and romantic? (Laughter.) What a great son-in-law we've got. (Laughter.)

So here today, as we celebrate the very start of the summer season, it's a perfect time for us to recommit ourselves to preserving and protecting our fabulous national parks.

So thank you all very much. It's great to get to be with you here today. We're going to walk on these carriage trails this afternoon and tomorrow, and we're really looking forward to seeing the farm and some other things here. We already toured the Rockefeller house, so that's been very fun. And then we'll go on to Acadia and do the same thing for the rest of the week.

So thank you all very much. Thank you for your support of this fabulous national park. (Applause.)