For Immediate Release
Office of the Press Secretary
June 20, 2008

THE PRESIDENT: Good morning. This week Congress moved forward on two important issues affecting the national security of our country.

Yesterday the House passed a responsible war funding bill that will provide vital resources to our men and women on the front lines in the war on terror. This legislation gives our troops the funds they need to prevail without tying the hands of our commanders in the field or imposing artificial timetables for withdrawal. 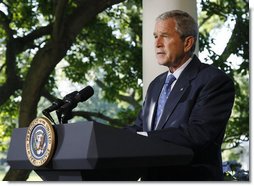 The bill also supports our military families by passing an expansion of the GI Bill that makes it easier for our troops to transfer unused education benefits to their spouses and their children. I want to thank the members of Congress for their action on this legislation, and I urge the Senate to pass it as soon as possible.

Members of the House and Senate also reached a bipartisan agreement yesterday on legislation to allow our intelligence professionals to quickly and effectively monitor the plans of terrorists abroad, while protecting the liberties of Americans here at home.

My Director of National Intelligence and the Attorney General tells me that this is a good bill. It will help our intelligence professionals learn our enemies' plans for new attacks. It ensures that those companies whose assistance is necessary to protect the country will themselves be protected from liability for past or future cooperation with the government.

The enemy who attacked us on September the 11th is determined to strike this country again. It's vital that our intelligence community has the ability to learn who the terrorists are talking to, what they're saying, and what they are planning.

I encourage the House of Representatives to pass this bill today, and I ask the Senate to take it up quickly so our intelligence professionals can better protect Americans from harm.

I'm pleased with the bipartisan cooperation on both these bills, and I thank the members for their efforts. Thank you. 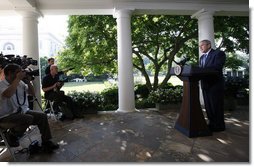