THE PRESIDENT: Welcome to the East Room of the White House. I welcome members of my Cabinet and my administration; a music lover, Senator Orrin Hatch from the great state of Utah; distinguished guests. We're so pleased you're here to celebrate a great American art form: jazz. And we hope you're jazz lovers, because you're going to hear some good music tonight. (Applause.)

The story of jazz mirrors the story of our nation. This proud musical tradition was born of the songs brought here by African slaves. Decades later, it absorbed the waltzes that accompanied immigrants from Europe. Over time, jazz helped break down barriers of prejudice between blacks and whites -- and even defined an age that brought new liberty to America's women. 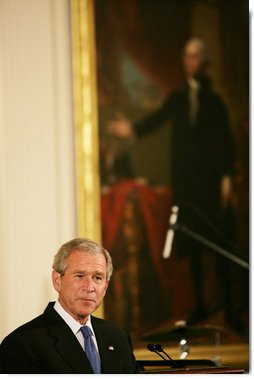 In a twist of history, the music that came to America in chains ultimately helped America spread freedom abroad. In 1956, the State Department sent American jazz musician Dizzy Gillespie around the world on a mission to trumpet American values. He was in Turkey when word came that a group of Cypriot students stoned the U.S. Embassy in Athens. And so he was sent to the Greek capital to soothe anti-American hostility with a jazz performance. The concert atmosphere was tense, the students stormed the stage, people were nervous -- until the students put Dizzy Gillespie on their shoulders, and shouted "Dizzy, Dizzy, Dizzy." (Laughter.)

With its spontaneity and energy and innovation, jazz expresses the best of America's character. And through its role in fostering freedom and equality, jazz reflects the best of America's ideals. Tonight, this magnificent art form will be brought to life by some jazz masters. Grammy-award winning guitarist Earl Klugh will play for us after dinner. And before dinner, we're honored to hear from saxophonist Davey Yarborough, vocalist Esther Williams from the Washington Jazz Arts Institute.

Before Davey and Esther take the stage, please join me in a toast to American jazz, but more importantly, to the United States of America.