For Immediate Release
Office of the Press Secretary
June 18, 2008

THE PRESIDENT: Good morning. I want to thank Secretary Kempthorne and Secretary Bodman for joining me. For many Americans, there is no more pressing concern than the price of gasoline. Truckers and farmers and small business owners have been hit especially hard. Every American who drives to work, purchases food, or ships a product has felt the effect. And families across our country are looking to Washington for a response. 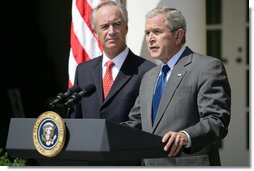 High oil prices are at the root of high gasoline prices. And behind those prices is the basic law of supply and demand. In recent years, the world's demand for oil has grown dramatically. Meanwhile, the supply of oil has grown much more slowly. As a result, oil prices have risen sharply, and that increase has been reflected at American gasoline pumps. Now much of the oil consumed in America comes from abroad -- that's what's changed dramatically over the last couple of decades. Some of that energy comes from unstable regions and unfriendly regimes. This makes us more vulnerable to supply shocks and price spikes beyond our control -- and that puts both our economy and our security at risk.

In the long run, the solution is to reduce demand for oil by promoting alternative energy technologies. My administration has worked with Congress to invest in gas-saving technologies like advanced batteries and hydrogen fuel cells. We've mandated a large expansion in the use of alternative fuels. We've raised fuel efficiency standards to ambitious new levels. With all these steps, we are bringing America closer to the day when we can end our addiction to oil, which will allow us to become better stewards of the environment.

In the short run, the American economy will continue to rely largely on oil. And that means we need to increase supply, especially here at home. So my administration has repeatedly called on Congress to expand domestic oil production. Unfortunately, Democrats on Capitol Hill have rejected virtually every proposal -- and now Americans are paying the price at the pump for this obstruction. Congress must face a hard reality: Unless Members are willing to accept gas prices at today's painful levels -- or even higher -- our nation must produce more oil. And we must start now. So this morning, I ask Democratic Congressional leaders to move forward with four steps to expand American oil and gasoline production.

First, we should expand American oil production by increasing access to the Outer Continental Shelf, or OCS. Experts believe that the OCS could produce about 18 billion barrels of oil. That would be enough to match America's current oil production for almost ten years. The problem is that Congress has restricted access to key parts of the OCS since the early 1980s. Since then, advances in technology have made it possible to conduct oil exploration in the OCS that is out of sight, protects coral reefs and habitats, and protects against oil spills. With these advances -- and a dramatic increase in oil prices -- congressional restrictions on OCS exploration have become outdated and counterproductive.

Republicans in Congress have proposed several promising bills that would lift the legislative ban on oil exploration in the OCS. I call on the House and the Senate to pass good legislation as soon as possible. This legislation should give the states the option of opening up OCS resources off their shores, provide a way for the federal government and states to share new leasing revenues, and ensure that our environment is protected. There's also an executive prohibition on exploration in the OCS. When Congress lifts the legislative ban, I will lift the executive prohibition.

Second, we should expand oil production by tapping into the extraordinary potential of oil shale. Oil shale is a type of rock that can produce oil when exposed to heat or other process[es]. In one major deposit -- the Green River Basin of Colorado, Utah, and Wyoming -- there lies the equivalent of about 800 billion barrels of recoverable oil. That's more than three times larger than the proven oil reserves of Saudi Arabia. And it can be fully recovered -- and if it can be fully recovered it would be equal to more than a century's worth of currently projected oil imports.

For many years, the high cost of extracting oil from shale exceeded the benefit. But today the calculus is changing. Companies have invested in technology to make oil shale production more affordable and efficient. And while the cost of extracting oil from shale is still more than the cost of traditional production, it is also less than the current market price of oil. This makes oil shale a highly promising resource.

Unfortunately, Democrats in Congress are standing in the way of further development. In last year's omnibus spending bill, Democratic leaders inserted a provision blocking oil shale leasing on federal lands. That provision can be taken out as easily as it was slipped in -- and Congress should do so immediately.

Third, we should expand American oil production by permitting exploration in the Arctic National Wildlife Refuge, or ANWR. When ANWR was created in 1980, Congress specifically reserved a portion for energy development. In 1995, Congress passed legislation allowing oil production in this small fraction of ANWR's 19 million acres. With a drilling footprint of less than 2,000 acres -- less than one-tenth of 1 percent of this distant Alaskan terrain -- America could produce an estimated 10 billion barrels of oil. That is roughly the equivalent of two decades of imported oil from Saudi Arabia. Yet my predecessor vetoed this bill.

In the years since, the price of oil has increased seven-fold, and the price of American gasoline has more than tripled. Meanwhile, scientists have developed innovative techniques to reach ANWR's oil with virtually no impact on the land or local wildlife. I urge members of Congress to allow this remote region to bring enormous benefits to the American people.

And finally, we need to expand and enhance our refining capacity. Refineries are the critical link between crude oil and the gasoline and diesel fuel that drivers put in their tanks. With recent changes in the makeup of our fuel supply, upgrades in our refining capacity are urgently needed. Yet it has been nearly 30 years since our nation built a new refinery, and lawsuits and red tape have made it extremely costly to expand or modify existing refineries. The result is that America now imports millions of barrels of fully-refined gasoline from abroad. This imposes needless costs on American consumers. It deprives American workers of good jobs. And it needs to change.

So today I'm proposing measures to expedite the refinery permitting process. Under the reformed process that I propose, challenges to refineries and other energy project permits must be brought before the D.C. Circuit Court of Appeals within 60 days of the issuance of a permit decision. Congress should also empower the Secretary of Energy to establish binding deadlines for permit decisions, and to ensure that the various levels of approval required in the refinery permitting process are handled in a timely way.

With these four steps, we will take pressure off gas prices over time by expanding the amount of American-made oil and gasoline. We will strengthen our national security by reducing our reliance on foreign oil. We will benefit American workers by keeping our nation competitive in the global economy -- and by creating good jobs in construction, and engineering, and refining, maintenance, and many other areas.

The proposals I've outlined will take years to have their full impact. There is no excuse for delay -- as a matter of fact, it's a reason to move swiftly. I know the Democratic leaders have opposed some of these policies in the past. Now that their opposition has helped drive gas prices to record levels, I ask them to reconsider their positions. If congressional leaders leave for the 4th of July recess without taking action, they will need to explain why $4-a-gallon gasoline is not enough incentive for them to act. And Americans will rightly ask how high oil -- how high gas prices have to rise before the Democratic-controlled Congress will do something about it.

I know this is a trying time for our families, but our country has faced similar strains before and we've overcome them together -- and we can do that again. With faith in the innovative spirit of our people and a commitment to results in Washington, we will meet the energy challenges we face -- and keep our economy the strongest, most vibrant, and most hopeful in the world.