THE PRESIDENT: It's been my privilege to serve with two really fine Americans, General Dan McNeill and Maureen McNeill. I've gotten to know the General well. He's a tough, no-nonsense patriot who was our commander in Afghanistan. I want to thank you very much for the briefing you just gave me about the issues that we face, your optimism about success. 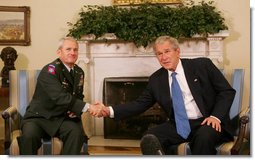 I was telling the Secretary and the General I just -- about my trip to Europe, where I was pleased with the strong commitments of our allies to helping us succeed in Afghanistan. They know that what happens in Afghanistan matters to their own internal security.

They fully understand as well that helping young girls go to school and helping moms raise their babies in a -- you know, in a better environment, helping rebuild this society after years of tyranny is in all our interests. And it's also a moral duty we have.

And so I'm pleased, Mr. Secretary, that your hard work in working with the allies is paying off.

And, General, I know you're moving on, but the country thanks you for what you did. The world is better off because of your service. I'm proud to have you here.