THE PRESIDENT: Thanks for coming. Please be seated. Thank you. Welcome to the White House. I really appreciate you coming to celebrate Black Music Month. Music has been a part of this house since its beginning. Some of our Presidents themselves were skilled musicians. Some were not. (Laughter.) As a matter of fact, after The Temptations came here a couple of months ago, I was so inspired that I thought I would take up singing. (Laughter.) Laura said, you might just stick with practicing your speaking. (Laughter.) So thanks for giving me a chance to do it today. And thanks for coming. We're going to have a pretty special day here at the White House. 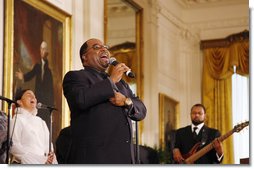 I want to thank my friend, Alphonso Jackson, and Marcia, it's good to see you. Appreciate you being here.

John Styll, President and CEO of the Gospel Music Association -- thanks, John. (Applause.) Dr. Bobby Jones, television host. Where are you, Bobby? There you are -- Bobby. (Applause.) Dyana Williams, Co-founder and President of the International Association of African American Music -- Dyana, thank you for coming. (Applause.) And everybody else. (Laughter.)

As we honor black music in America, our thoughts turn to one of its legends -- Bo Diddley. Bo was one of the pioneers of rock and roll. And during his more than five decades as a singer, songwriter and performer, he changed the face of music. He really did. We mourn his loss, yet we know this -- that his memory will live on in the songs and the joy he brought to millions -- including a little fellow like me. So all of us here today send our thoughts and prayers to Bo Diddley's family.

In the ensuing decades, other Presidents followed this example -- recognizing the contributions of black musicians when many other Americans would not. Benjamin Harrison welcomed the daughter of a former slave -- an opera singer named Sisseretta Jones. President Franklin Roosevelt called on the talented Maria [sic] Anderson to sing "Ave Maria" for the King and Queen of England. 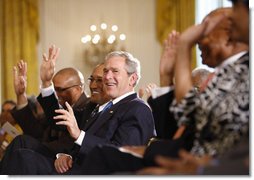 In 1979, President Jimmy Carter welcomed the legendary Chuck Berry in his first official celebration of Black Music Month at the White House. Ever the performer, Chuck Berry changed the lyrics in one of his famous songs from "Oh Carol" to "Oh Amy," in honor of the little girl sitting on the White House lawn. The day's finale came when the entire audience rose to its feet, swaying and clapping to the gospel song "Jesus is the Answer."

For this year's Black Music Month, we return to the theme of gospel music. The gospel music tradition was born from great pain. Slaves sang spirituals to communicate with one another in the fields, and songs of faith helped black Americans endure the injustice of segregation. Today, gospel is more than an anchor for black culture and history -- it's a source of inspiration for the whole nation.

Gospel has influenced some of the legends of other forms of American music. Louis Armstrong once said that when he sang in church his heart went into every song. Aretha Franklin wowed crowds in her dad's church in Detroit. Elvis Presley listened to gospel music after rock concerts to calm his mind. And Bob Dylan won a Grammy for a song for his album of Gospel hymns.

Today, gospel music continues to provide strength for our communities, and it is making the Good News sound sweeter than ever. I know you're looking forward to three great gospel performers we have in store. So I'd like to now turn the podium over to the founder of Gospel Today magazine -- our outstanding emcee this evening, Teresa Hairston. (Applause.) 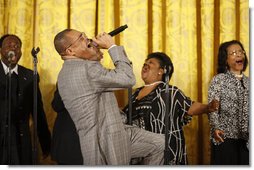 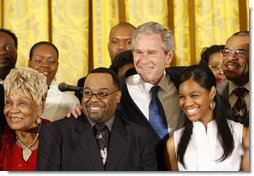 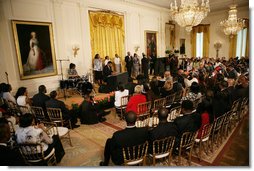 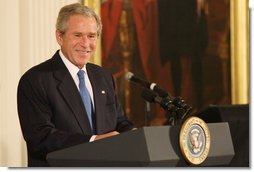