THE PRESIDENT: I've just assembled my -- many people on my domestic policy team to discuss the current flooding in the Midwest. Of course, our hearts and thoughts go to those who lost life. And of course, we're concerned about those whose -- who lost their homes or lost their businesses.

For example, in the case of Iowa, one of the issues was the need for fresh drinking water or drinking water, and so Director Paulison informed me that we've provided about 2 million liters of drinking water. When I was overseas I spoke to the Governor, and he said, listen, I -- the federal -- we need federal help on drinking water. So I sent the word to David and he responded well. 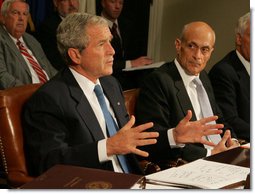 My only point to you is, is that we're in constant contact with people on the ground to help make sure that we save lives. Now that the water is beginning to recede, the question is, how do we help with the recovery? And Secretary Chertoff briefed me on plans, particularly when it comes to housing. A lot of people are going to be wondering, is there short-term help for housing? And there is, and we'll provide that help.

Secondly, what's going to happen in the long term to the homes? And so Michael is going to set up a housing task force similar to the kind we set up in California for the wildfires, to work with state and local authorities to have an orderly strategy to help people get back in their homes.

I fully understand people are upset when they lose their home. A person's home is their most valued possession. And we want to work with state and local folks to have a clear strategy to help people find -- get back into a place that -- where they can live.

Secondly, we're worried about farmers and ranchers. The country that's being affected by these floods has got a lot of farm country, a lot of people raising livestock. And the Secretary of Agriculture has briefed me on the conditions -- and we're still assessing how widespread the damage is on the farmlands -- and assures me that his team is in place to help farmers and ranchers with the federal aid available.

And finally, Director Nussle is here from the Budget Office. We've got what we called a Disaster Relief Fund. There's enough money in that fund to take care of this disaster. But what we're concerned about is future disasters this year. And therefore, we're going to work with the Congress. Jim Nussle is going to go up to work with Congress to get enough money in the upcoming supplemental to make sure that fund is -- has got enough money to deal with a potential disaster, another disaster this year.

Congress doesn't need to worry about working with the White House on this, because we think the supplemental is the way to go. What they do need to worry about is making sure that there is enough but not too much money in the fund, so we can say we have done our job.

This Thursday I'm going to take our team down there to meet with the folks in Iowa. And I, unfortunately, have been to too many disasters as President. But one thing I've always learned is that the American citizen can overcome these disasters. And life, while it may seem dim at this point in time, can always be better because of the resiliency and care of our citizens.