For Immediate Release
Office of the First Lady
June 16, 2008

MRS. BUSH: One of the reasons I really wanted to come to the Charles Dickens house is because I think it's so important for us as English-speaking people to be aware of what our literature is, and certainly Charles Dickens is very well known and very popular and studied in the United States. 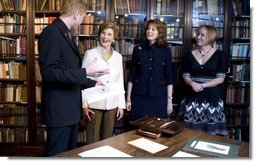 So I think it's really important for all of us to continue to read literature. There are a lot of studies now that show a lot of Americans are what is called alliterate -- they can read but they don't. They work on a computer or they watch television. And it will be a huge loss for all of us if we don't read our literature, because that's how our ideas and our values are transmitted from generation to generation.

So I especially wanted to pay my respects to the work of Charles Dickens by visiting here.