For Immediate Release
Office of the Press Secretary
June 16, 2008

PRESIDENT BUSH: Mr. First Minister, Mr. Deputy Minister, thank you for your hospitality. I'm excited to be here in Northern Ireland. And one of the reasons why is because I'm impressed by the progress that is being made toward peace and reconciliation. As a matter of fact, the world is impressed by the progress being made toward peace and reconciliation. And that obviously takes a commitment by leadership. And I want to thank you all for giving me time to hear your thoughts and to visit with you. 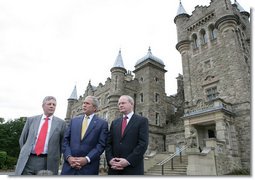 We talked about a lot of issues. We talked about the devolution of police and justice. We talked about the successful investment conference that took place here. And I want to thank my fellow citizens for coming and I want to thank those around the world who are paying attention to Northern Ireland. The truth of the matter is this is -- you know, people who have come here and looked at the government, looked at the situation and gotten to know the people realize this is a good place to invest. And ultimately, investment is going to help Northern Ireland realize its full potential.

And then finally, I was able to thank the leaders for their work in helping others reconcile their differences. The interesting thing about the progress being made here in Northern Ireland is that it's attracted the attention of societies around the world that wonder whether reconciliation is possible for them. And Martin was telling me about his talks with some of the Iraqi leaders, about his -- sharing his stories about how folks can reconcile. Northern Ireland is a success story. Obviously there's more work to be done, but the progress made to date has been unimaginable 10 years ago.

And I want to congratulate you, thank you for serving your communities. And I wish you all the very best as you continue your journey.

FIRST MINISTER ROBINSON: Thank you very much, indeed. Can I say that I'm delighted that President Bush, of his own choice, has recognized that Belfast is one of the major cities of Europe, and has included it in this tour. It is a personal commitment that the President has towards Northern Ireland, and we are really grateful, not just for him coming today, but for the work that has been done by the President and his ambassadors over the previous years, and particularly the work that has been done most recently for the investment conference.

The endorsement of the President for our investment conference goes a long way, and it lets people throughout the world know that Northern Ireland truly is open for business.

DEPUTY FIRST MINISTER MCGUINNESS: Can I say, just to echo what Peter has said, that this is an opportunity for us to express our thanks and appreciation for the tremendous work that has been done, in terms of the United States of America, and what has (inaudible) one of the most successful peace processes in the world today. Beginning with the work of President Clinton, the contribution of Senator George Mitchell, the envoys that were sent by President Bush, such as Richard Haass and Mitchell Reiss and now Paula Dobriansky, all of whom have played a very important role in contributing to our process, which I do believe is, as the President has identified, a real model for how other conflicts can be resolved in other parts of the world.

And really we're having a tremendous amount of interest in our work. We've had two delegations of Iraqi parliamentarians to (inaudible) here in Belfast, just a few yards up the road. And there is no doubt whatsoever that other places that have suffered from conflict are anxious to learn from our experiences. We don't believe that we have got all of the answers, but what we can say is that there is -- outlay our experiences for others to consider.

We also are very appreciative of the width of support that has been put behind the economic investment conference by the President and by Paula Dobriansky as ambassador. But we're very hopeful in the time ahead -- in fact I think we're confident that jobs, much needed jobs, will (inaudible) providing good jobs, a decent standard of living, facing up to the economic difficulties that are -- people have to endure, as a very important part of a workload which Peter and I, as First and Deputy First Minister, need to take forward in the time ahead.

PRESIDENT BUSH: Thank you all very much.