For Immediate Release
Office of the Press Secretary
June 12, 2008

AMBASSADOR SPOGLI: Mr. President, good morning; good morning to everyone. First of all, I'd like to welcome you to the American Academy and thank you for having so graciously agreed to be with us here this morning. I'd like to also welcome all of our fellow roundtable participants. As you know, we have eight students, five of whom have been to the United States on our BEST program, three of whom will shortly depart. 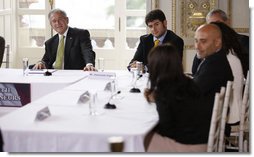 And then we do have a couple of gentlemen who are slightly older than our researchers and scientists who are here -- not that old, certainly, but a bit older -- Michele and Marco, who have been successful entrepreneurs, have overcome the difficulties that we've talked about for some time in the Italian system, and who have graciously created an NGO that works on helping your entrepreneurs overcome difficulties. I'd like to also recognize our sponsors and welcome them this morning, and I'll have occasion to come back to you in a second.

I think it's only fitting, actually, that we're here at the American Academy, which is an unusual, typically American creation. Most of you perhaps know that the American Academy is the only one of over 30 academies that are here in Rome that is completely funded by private contributions, and was actually started by some of the great names in business in America well over a hundred years ago: JP Morgan, Rockefeller, Carnegie, and several other key entrepreneurs of the time all got together and made a venture capital investment in the American Academy, and it has grown to be arguably the most successful academy here in Rome.

Why are we here this morning to talk about entrepreneurship, innovation, and the commercialization of research? Two-and-a-half years ago we began in the embassy an initiative which we called the Partnership for Growth. The Partnership for Growth has had as its ambitious objective trying to provide stimulus to the Italian economy. As you know, Mr. President, the Italian economy grew extremely well in the 1960s and '70s, created a so-called Italian miracle, but clearly economic stagnation has been the rule rather than the exception for at least all the years in the new millennium and for a number of years before that.

Clearly, economic growth is the key question facing the country today, and so the Partnership for Growth was conceived as a way to make a contribution toward the economic growth of Italy. And we focused on three fundamental areas. The first was commercializing research. Italy does a tremendous amount of high-quality research in nanotechnology and biotechnology and in other fields, but unfortunately a relatively small amount of that research ever becomes commercialized. And so we wanted to fundamentally address that question.

Second issue is one of a scarcity of financing for risk taking capital enterprises. Italy is a country of great savers, has a very high savings rate, yet unfortunately very little is channeled into venture capital and private equity. We wanted to address this particular question, as well. So we've had over 200 events in the course of almost three years focusing on ways that we could share information and enhance not only our bilateral economic relationship, but hopefully address some of these fundamental questions.

Which brings me to the third and most important element of the Partnership for Growth, and that is our BEST student exchange program. Many companies came to us and said, it's great that you're focusing on technology transfer, it's great that you're focusing on venture capital, but there's one very important element that we'd like you to make a contribution to, and that is helping to change and add to the entrepreneurial culture of our country. You need to send high-quality researchers and scientists and engineers to the United States, give them a full immersion opportunity in a place like Silicon Valley, have them come back, take some of those experiences, and then begin to create here in Italy a wonderful, unique entrepreneurial ecosystem.

And so we did just that. We created the BEST program, Business Exchange and Student Training. And in that program, we send young, promising scientists and engineers to the United States; they study for six months in Silicon Valley, three months at the University of Santa Clara in their entrepreneurship center, and then they do a three month apprenticeship in a high-tech startup company to see literally how you can go from the creation of an idea to the -- to hopefully the formation of the next great business here in Italy. The researchers must come back to Italy and share their experiences here, and hopefully develop their research ideas.

The program started last year with a five-person contingent, all of whom are here today. This year it's 15, it's grown to 15, three of whom are here, and next year we hope to grow the program to 25, and hopefully more into the future.

One final comment, sir, before I turn it over to you, and that is, the program would not have been possible without our many sponsors and supporters who are in the audience this morning. One hundred percent of this program was financed here in Italy by the generosity and forward thinking of our sponsors. Who do we have? We had Italian businesses, we had American companies who have subsidiaries in Italy, we had a number of associations that are interested in economic growth and development, we've had cities and we've had regions participate.

So for example, the city of Milan was a very early supporter of our program, Mr. President, and we have the Mayor of Milan, Mayor Moratti, who is here this morning representing her fine city. We've had tremendous support from the Italian postal system, and we have the Chief Executive Officer this morning, Massimo Sarmi, who is the head of that organization, certainly. And then we've had wonderful support from a number of American businesses, such as IBM, who is represented by Dr. Martucci this morning, who has been again a great supporter of our program. We're delighted they're here. They contribute over a million dollars to this program. We'd like them to contribute a lot more going forward so we can send more high-quality students. 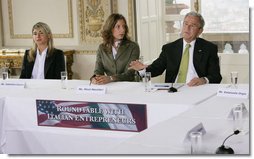 And, sir, I'd like to turn it over to you and thank you again.

PRESIDENT BUSH: Mr. Ambassador, thank you. First of all, I do want to thank the folks here at the American Academy for welcoming me, and what generally is a rather large entourage. I'm real proud of the fact that my fellow citizens have contributed to the restorations building -- it turns out someone from the great state of Texas, notably Mercedes Bass. And I want to thank them, and thank my citizens for supporting this important institute.

I want to thank you all for giving me a chance to come by and listen to you. I want to hear your impressions of America. I want to hear what you think of the challenges, as this really important country moves ahead. And I really want to hear how you intend to contribute to the future of your country.

I want to thank you all for sponsoring these exchanges. Madam Mayor, I'm particularly pleased that you're here. You know, one of the best diplomacy -- the best diplomacy for America, particularly among young folks, is to welcome you to our country. You get to see first hand the truth about America -- like a lot of images. There's a lot of, in my view, misinformation and propaganda about our country. We're a compassionate, we're an open country. We care about people, and we're entrepreneurial. And we love the entrepreneurial spirit. We love it when somebody has a dream, and then is -- works hard to achieve the dream, thereby contributing to the society and creating jobs for people, so they can realize their aspirations as well.

And so I want to thank you, Ambassador, for getting this program going, and thank you all for coming to share your thoughts with me. I really am looking forward to hearing from you.

PRESIDENT BUSH: Marco, what do you do?

MR. PALOMBI: I actually sold my company a year-and-a-half ago.

PRESIDENT BUSH: Oh, so you retired?

MR. PALOMBI: We actually created with Michele the NGO the Ambassador was referring us for.

MR. PALOMBI: So basically I created the largest blogging platform in Italy.

MR. PALOMBI: Yes, yes, yes. And then I sold it to one of the largest media company in Italy.

MR. PALOMBI: Thank you. But what the Ambassador was saying is really important I guess. This country needs role models because right now role models in Italy are basically soccer players and starlets, basically. And as a young man graduating from a university and stuff like that, you don't think you can create your own dream. If you ask an Italian, 30 percent of the Italians think that they can achieve their own dream, compared to 70 percent in America. The other 70 percent of the Italians, they think that the state or some other people should provide help for them to achieve their dreams.

So when we started with Michele and with the Ambassador, we thought that we have to change this, we have to explain with -- what we did basically, that you can achieve your dream even in Italy right now, which is difficult basically because the economy is very stagnant, because there is not enough competition both between companies, and the institutions, they don't really help; actually they stop you from doing things.

So what we did was basically introduce our friends who have achieved something in Italy, too. We call them first generation entrepreneurs because we think that the best role model will be someone who started from zero, who doesn't have his parents' money behind, and he really started from scratch, he risked. And we chose these guys, and we had these video chats on the Internet, which we -- which are now there. And it's one of the best probably entrepreneurship material that you have in Italy right now. It's funny because right now talking to people who have watched this video chats, they really are motivated by what they see. And this is amazing because you can change things by showing them that someone like them did it.

MS. MACELLARI: I am one of the pioneer. I take part in BEST program last year. I have a degree in biotechnology and with the Fulbright-BEST program I had the best opportunity, the greatest opportunity I was really looking for -- so a program who could allow me to head to my scientific and technology background, business skill and great economic and business experience over there in a unique and so dynamic reality that Silicon Valley is.

So I think that on our own, what we can do, it's try to import and improve those kind of mindsets and habits we met and we knew in California, especially in Silicon Valley, because I think, I really think, I strongly believe that in Italy we have everything we need to make a success and to turn a good scientific project in business and bring greatest scientific idea to the market. We have a strong example of entrepreneurs that did so, so on our own we can follow --

MS. MACELLARI: -- his example. And we can represent as the first people who've gone there, a good example for all the other students for the future years.