For Immediate Release
Office of the First Lady
June 11, 2008

Mr. Lemaître, the Treasurer of the Debussy Documentation Center, thank you very much for joining us. Our pianists tonight -- that's going to be a real thrill to hear -- Alexandre Tharaud and Noël Lee. And I also want to say a special thanks to the National Geographic Society for sponsoring this great show that is at the National Gallery in Washington. 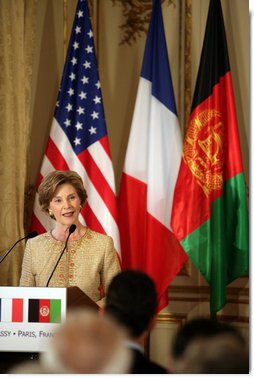 Our ambassador from the United States to Afghanistan, Bill Wood, is here as well. Thank you, Ambassador Wood. He was my host and went everywhere with me on Sunday when I was in Afghanistan.

Khaled Hosseini, the author of "The Kite Runner" and "A Thousand Splendid Suns" and one of the President's and mine favorite authors is here, and we'll hear from him in just a moment.

I'm very happy to be here tonight for this celebration of rediscovered treasures, Debussy's Première Suite, which we're going to get to hear in just a moment; the National Treasures from Afghanistan, which have a wonderful story themselves about the way they were hidden and protected by Afghans so they wouldn't be destroyed during the years of war and then the years of the Taliban.

And then the part -- the "rediscovered treasure" that's closest to my heart are the women and children of Afghanistan. The women and girls of Afghanistan were invisible to the wider world about seven years ago, and it was only after September 11th that many of us in the Western world looked, and looked for those women and those children. And then, of course, what we saw was so disturbing to us, the way girls were denied an education and women were denied the right to work or to even walk on the streets without a male escort.

There's really good news now. Now more than 80 members of Afghanistan's parliament are women. I just visited the female governor of Bamiyan province when I was just there. I met Afghan business owners and entrepreneurs. Female doctors, nurses and midwives can be found throughout the country. And of course, many, many little girls are in school now across Afghanistan.

I met with some of these courageous women this weekend, including -- and who would have ever thought this seven years ago -- some women who are studying to be police officers in Bamiyan province. And the lesson they were doing when I met them was they were studying their constitution, which Afghanistan of course has written, the people of Afghanistan have written in just the last few years. One woman said, "My greatest accomplishment is recruiting 14 females into the police force." And this woman said she dreams of being the police chief herself of Bamiyan province. 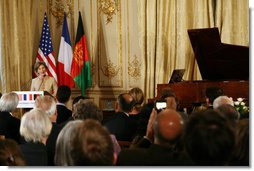 Illiteracy, of course, remains a major problem for all the people of Afghanistan -- women and men and children. So many people were denied an education, both men and women, through -- because of the years of war and repression. An estimated 11 million Afghans above the age of 14 cannot read. And in rural areas, three-fourths -- where three-fourths of all Afghans live, nearly 90 percent of the women are illiterate.

Last weekend in Afghanistan I announced a U.S. commitment of $40 million in new funding for the Afghan Ministry of Education's National Literacy Center. The Ministry of Education has started this Literacy Center not only to make sure girls and boys are educated, but to also offer literacy training to the men and women of Afghanistan who were denied an education during their own childhoods. This Center will reach rural and remote areas with literacy training and job training for everyone.

Tonight I'm happy to announce that next September during the United Nations General Assembly in New York, the White House will host a symposium on advancing global literacy, to build on the momentum that was created by the 2006 White House conference, and then the subsequent UNESCO regional literacy conferences. UNESCO has hosted conferences in every part of the world to try to reach those countries with the highest illiteracy rate, with programs that are successful also from every country.

Tomorrow I'll speak at the international conference in support of Afghanistan, and I'll reaffirm the commitment of the people of the United States of America to helping Afghanistan rebuild as a secure and free country.

Thank you very much to President Sarkozy and the people of France for hosting this conference, and for your contributions toward Afghanistan's development.

Now it's my pleasure to introduce Khaled Hosseini. Mr. Hosseini moderated the film "Afghanistan's Hidden Treasures." I don't know if you heard it in the other room. But of course he's best known as a very best-selling author. I think he's -- has two major best-sellers: "The Kite Runner" and "A Thousand Splendid Suns."