For Immediate Release
Office of the First Lady
June 9, 2008

Q (As translated.) Your question is addressed the honorable Laura Bush. And the question is: Why did you choose Bamiyan to visit?

MRS. BUSH: Well, for several reasons. One, because, of course, I wanted to go see Governor Sarabi, who I've met before on several occasions when she was the Minister of Women's. And then it was just a part of Afghanistan I hadn't seen, and so I wanted to go see it. And of course, the security there is a lot better, which was better for me, because I didn't have to take as much of a security entourage as I might have at some other place. 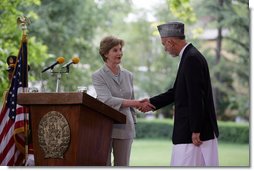 Q Mr. President, thank you -- New York Times. At Paris, you are going to get a lot of critical review from the Europeans, particularly the donors, for corruption in your government. What can you answer to them that you will do more?

And Mrs. Bush, if you have time, could you also -- are you raising the question of corruption in the Afghan government today?

MRS. BUSH: Am I -- what did you say at the end of your question?

Q Question of corruption in the Afghan government.

Q Are you discussing it today?

I thought -- I think your question was interesting, because you said he would be getting a lot of criticism from the journalists.

MRS. BUSH: Donors? You think the European donors are going to be criticizing, or you think it will just be the journalists? (Laughter.)

PRESIDENT KARZAI: Well, ma'am, we are going to the Paris conference with a very realistic evaluation of the past six years of our achievements, of our progress, of our problems, and with our objectives for the future, and the wish list for the future, which the international community will surely continue to assist Afghanistan.