For Immediate Release
Office of the First Lady
June 8, 2008

MRS. BUSH: I'm thrilled to be back here at Bagram Air Force Base to speak with each of you -- the soldiers, sailors, airmen and Marines of Combined Joint Task Force 101. From overseeing --

MRS. BUSH: -- from overseeing hospitals to responding to IEDs, your efforts are critical to our mission in Afghanistan. I want to acknowledge Major General Jeff Schloesser. Thank you very much, General -- appreciate it very much. Everyone here who has helped make our trip possible, thank you for all the hard work you've done that made this day in Afghanistan so terrific for me. I appreciate it a lot. You know, I've kind of gotten used to flying on Marine One, but it's not every day that you get to ride in a helicopter staffed by the men and the women of the 101st, and that was really pretty terrific. (Applause.) 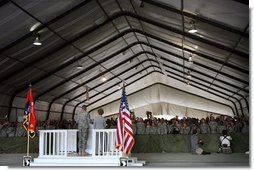 On behalf of President Bush and a grateful nation, thank you very much for your service to the United States of America. I really thank you and thank your families as well. Every day you risk your lives to secure the freedom that we all hold dear. And as you go about your daily duties, you're bringing opportunity and security to the people of Afghanistan.

I want to tell you just a couple of things that I saw today. This is my third trip, and I do think every time Afghanistan looks better. This morning I heard from women training at the Bamiyan Regional Police Training Center. So imagine this: women police officers in Afghanistan. One woman told me that she was the first female police officer, and because she was inspired by her governor, Governor Habiba Sarabi, the first female governor in Afghanistan, she actually went ahead and tried to become a police officer: "If the governor can take on so much responsibility she has, then why can't I?" Now she's working to recruit other female police officers and to raise awareness of their work.

Trainees at another class I visited were studying the Afghan constitution. Seeing those women hard at work in their classroom was a vivid reminder of how far this nation has come since the Taliban's reign when women were not even allowed in school and there was no democratic constitution to be studied.

I was greeted at my next stop by young children, orphans in Bamiyan. There were two major massacres by the Taliban in Bamiyan, and so there are a lot of children who are orphaned because of that. And this is a new learning center and school, a home and school that will be built there with the help of people in the United States -- men and women who have come together with private money to open this Ayenda Learning Center. These little kids met me with welcoming songs and one of those songs ended, "Long live Afghanistan."

But one of the most interesting visits I had today was with your colleagues in the New Zealand PRT. They met me with what my briefing papers described as a traditional welcoming ceremony. But when they began charging at me with spears -- (laughter) -- I wondered if my staff had been confused, and I can only imagine what the Secret Service thought. Their performance was very impressive and it was -- truly highlights the international make-up of security forces here in Afghanistan. And I do want to tell you that these soldiers from New Zealand told me how much they enjoyed working with their partners from the United States.

This week I'm going to attend the Paris donors conference, the Afghan donors conference in Paris, where the international community will come together again to make commitments to Afghanistan, to continue their building. And I hope that some of the things I saw today are things I can tell the donors when I meet them in Paris.

But I want you to know that I know that all of these encouraging stories and all of these terrific things that I saw today have been made possible by your efforts and the efforts of the United States military. And I thank you from the bottom of my heart for that, and so do the people of Afghanistan.

You've stepped forward to defend freedom against the forces of oppression. I know your work isn't easy. Many of you have faced multiple deployments. Many of you didn't expect to be here this year. You thought you were going to get to spend this year at home with your families. I know that and I understand that. And so I want to thank you, and I especially want to thank your families.

When you email them tonight or when you call them on the phone, give them my love and tell them I know what the burden of worry is on your family members. And I understand that and I thank them also, just like I thank you for everything you've done to support the government of Afghanistan while you've served in the United States military and served with such dignity and such respect.