For Immediate Release
Office of the Press Secretary
June 6, 2008

THE PRESIDENT: Thank you very much, Bonnie, for inviting me here. I'm proud to be here with Secretary of State Rice, Secretary of Treasury Paulson. Ambassador, thank you for being here.

I've just been briefed about how the United States private sector, faith-based community, NGO community is responding to what is a horrible human disaster in China -- estimated 70,000 people have died, 18,000 people missing, 15 million people homeless, and the tally is still being counted. There's no question this is a major human disaster that requires a strong response from the Chinese government, which is what they're providing, but it also responds [sic] a compassionate response from nations to whom -- that have got the blessings, good blessings of life, and that's us. 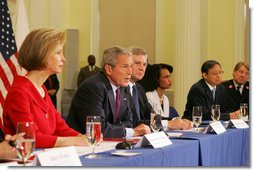 I told the folks assembled here that I'm not surprised that the American people have responded to this challenge. And the reason I'm not surprised is we're a compassionate, decent nation that cares deeply about a stranger who hurts. And so the response of the -- so far of our American citizens have been unprecedented and unparalleled in its compassion.

There will be more work that needs to be done. My message to the Chinese government is, thank you for welcoming our aid. Thank you for taking a firm response to this disaster, and just know the American people care about the people of China. When a brother and sister hurts, we care about it.

And so that's why our response has been so robust and so compassionate to date. I want to thank you all from the bottom of my heart for showing the great compassion of America. 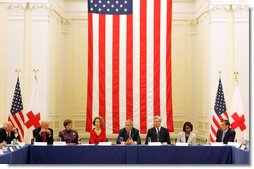