For Immediate Release
Office of the Press Secretary
June 5, 2008

PRESIDENT BUSH: Mr. Prime Minister, thanks for coming back. I enjoyed being with you. You represent a great country. You're a good friend of the United States of America. And I appreciate -- appreciate our candid discussion of a variety of issues.

First, I want to thank you and your folks for helping the people of Afghanistan realize the blessings of liberty. There's -- we're engaged in a struggle against ideologues who use murder to achieve their political objectives. One way to help defeat those folks and marginalize them is to help others realize the blessings of a free society. I appreciate your courage, and I appreciate your troops. But the people of Afghanistan appreciate them more. 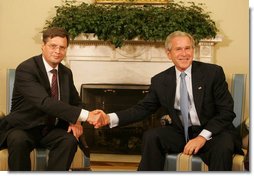 Talked about completing the WTO round, the Doha Round. The Prime Minister and I both agree a world that trades freely is a world that is a more hopeful world, and certainly a way to help people grow out of poverty.

And we talked about the climate issue. I assured him that the United States is concerned about the issue. We're concerned about being dependent on oil, and the two happen to go hand in hand. We've developed a strategy to encourage the advent of new technologies that will change our habits; at the same time allow us to empower our economy in a way that will help us be good stewards of the environment. I want to thank you for your candid discussion on that.

Relations, bilateral relations with our countries are very strong and very good, and I can't thank you enough for coming. Welcome.

PRIME MINISTER BALKENENDE: Mr. President, thank you very much for the hospitality and the friendship. It is true what you're saying about the bilateral relations between the United States and the Netherlands; they are very good. And also next year we have the 400-year celebration of the fact that Henry Hudson came, on behalf of the Dutch East Indian Company, to Manhattan.

PRIME MINISTER BALKENENDE: And they'll be celebrated, and just an example of the long tradition we have.

At this moment we're working together, and you referred to that, by example, in Africa, in the struggle against HIV/AIDS we are working together. We also are working together on the issue of deforestation in Latin America. There will be a meeting in Suriname in September, and we are supporting that event. And thanks for your remarks about our cooperation and the activities of our military people in Afghanistan. It's necessary to work together.

Of course, when you are friends, sometimes there are issues you do not agree about, but because you have a friendship, then you can talk about finding solutions and talk about critical aspects. We also talked about the European Union, and I'm convinced that the United States and the European Union share the same values. You talked about it: freedom, human rights and democracy, economic dynamism, sustainable development. And I think we -- if we work together, we really can make a difference. And I think it's necessary.

So I'm really looking forward with the new administration also to have good cooperation between the European Union and the United States.

It was also important what you said about the role of multilateral channels, the United Nations, but also we talked about the NATO. And it's important to make progress on the issues of climate change and energy. We have so many things in common.

So I want to thank you very much for the hospitality, the cooperation. You know, there are really close ties between the people of the United States and the Netherlands. And I'm sure that will continue in future. And when we talk about these issue -- important issues like human rights, freedom, democracy -- we have really a common responsibility.