For Immediate Release
Office of the Press Secretary
June 3, 2008

THE PRESIDENT: Please sit down. Welcome. It's an honor to welcome the 2008 NCAA Men's Basketball champs, the Kansas Jayhawks. (Applause.) So when Kansas fans come to the Rose Garden, they don't come to admire the flowers. (Laughter.) They come to "wave the wheat." (Applause.) I just wish Big Jay and Baby Jay could have come with you. Barney was looking forward to meeting them. (Laughter.) 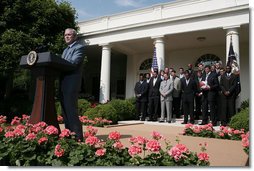 I want to congratulate this team. You brought new glory to one of our nation's most storied basketball programs, and you gave your fans all across America one more reason to chant: Rock Chalk, Jayhawk! (Applause.)

I appreciate Bob Hemenway, the Chancellor, and his wife Leah. Thanks for coming. Head Coach Bill Self, Cindy, daughter Lauren, and son Tyler -- we're sure glad you all are here.

I called Coach after the championship -- I think I might have woke you up.

COACH SELF: By a hair. (Laughter.)

THE PRESIDENT: Yes. I said, "Would you like to come to the White House? He said, "When?" (Laughter.) And I'm glad you're here, Coach, and congratulations.

I want to thank all the folks who represent KU -- the personnel, coaches and players.

This team got off to an incredibly fast start -- they won their first 20 games. They managed to beat Yale, my alma mater. (Laughter.) I'm not sure how you did it, but nevertheless -- (laughter) -- it was a great victory. You won the Big Twelve Title. You were the number one seed in the Midwest Region. Blew through the competition early, and then you won a thriller against Davidson, which propelled you to the Final Four in San Antonio, Texas. By the way, to my fellow Texans on the team, nice to see you. (Laughter.)

The interesting thing about the tournament in San Antonio was that all number one seeds made it to the Final Four. That's never happened before. It meant the competition was pretty tough. And this championship team gave America an unforgettable show -- really did.

In the semifinal match-up against North Carolina, you took a big lead and you held on. It was a team effort, but you got to note that Brandon Rush did score 25 points in the game. (Laughter.)

In the finals, you made a great comeback against Memphis. You overcame a nine-point deficit. Mario Chalmers, of course, hit the three-pointer to send you into overtime. (Applause.) The guy is known as Super Mario. (Laughter.) Then he became known as MVP. (Laughter.) 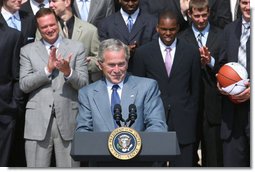 Most of the players on this team have little or no memory of the last time Kansas won a national title, which would be 1988. As a matter of fact, I'm sure some of the players weren't even born yet. It's really hard to envision when you're an old guy like me and Roberts. (Laughter.) The 1988 team became known as "Danny and the Miracles." And Danny Manning, welcome back to the White House. (Applause.)

This 2008 team will be remembered a little differently. More than any one player, Americans will remember the way you played as a team. They'll remember stifling defense. They'll remember the way seven different players led your team in scoring during the course of the season. Teamwork is a testament to the leadership of six seniors. It's a testament, as well, to a coach. Bill Self has proven himself to be one of the finest coaches in the land. And I'm sure -- (applause) -- and I am sure KU fans are delighted to know that he's going to keep coming back for a while. (Applause.)

The greatest testament to this team is also the character it showed not only on the court, but off. It turns out -- I often say this when I welcome championship teams here to the White House, but character matters a lot in order to become a champion. This is a team that when teammates lost loved ones, they had players-only meetings to help to rally their friends through a difficult time.

It's a team that reached out to others in need. Coach Self set the example by launching a foundation to help children in Lawrence build healthier and more wholesome lives. During the holiday, players -- players purchased gifts for needy families. You signed hundreds of balls for charity auctions. You ran free basketball clinics for children. And I'm very thankful that you went to Walter Reed to spend time with America's real heroes, our courageous wounded warriors. (Applause.)

I wish those of you going to pro-ball all the very best. Some of us are going to be out of work soon; we may be looking for loans. (Laughter.) I welcome you to the White House. Good luck next season. And may God bless you all. (Applause.)