For Immediate Release
Office of the Press Secretary
June 2, 2008

THE PRESIDENT: Thank you all for coming. I want to thank Dr. Lindsey and Bob Carroll, and John and Marty -- thank you all for talking about the benefits and wisdom of keeping taxes low. I do want to remind people what life was like in the years 2001 and 2003. The country was having some pretty tough economic times in 2001. Larry, you might remember that period. 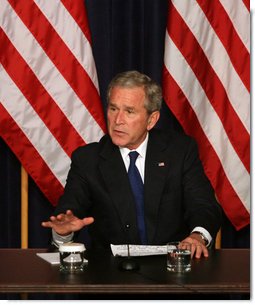 THE PRESIDENT: Yes, we had a period of -- we had a couple of meetings in Austin, Texas, prior to me getting sworn in as the President, and people from industry were saying, you're going to inherit a really tough period. I mean, clearly the economy was slowing, and so we had to strategize on how to deal with it. And Larry and others agreed that the best way to deal with economic uncertainty is to let people have more of their own money, because we believe that the economy benefits when there's more money in circulation, in the hands of the people who actually earned it.

I know that's probably not as sophisticated a concept as some of you all up here have articulated, but it's a concept that worked. And then when you couple the economic slowdown with an attack on our nation and our firm response to that attack, it created more economic uncertainty. And that's why the tax cuts of 2001 and 2003 were necessary. And the facts are that we had 52 months of uninterrupted job growth, the longest in the history of the United States.

And now the question is, what will the Congress do? Given the facts that tax cuts have worked, what will be the congressional response? Our response is, let's make those tax cuts permanent. Let's make sure that there is certainty during uncertain times in our economy. Imagine if you're trying to plan -- plan your life, plan the future for your small business -- and you don't know whether or not Congress is going to keep your taxes low. It makes your environment more uncertain.

Our fellow citizens have got to understand that those tax cuts aren't permanent. In other words, if Congress allows them to expire, here are the consequences: First of all, taxes go up by an average of $280 billion a year. And I promise you there's going to be a $280 billion expansion of government to couple that -- those tax increases. And the fundamental question is, who would you rather have spending your money -- you, or the Congress? I would strongly suggest the answer is, you. (Laughter.)

Our philosophy is not only does the economy benefit when taxes are low, we believe American families benefit when they have more money to spend. And it's that collective wisdom of individual Americans that really define the course for our country. And there really is kind of -- talks about the philosophical divide we face. Who is more wise -- the Congress, or the individual? We trust the individual. We trust that individual to make the proper decisions for their family.

Now, people say there's got to be basic services out of government. Absolutely. We got plenty of money in Washington. What we need is more priority. People got to set the priorities. Government can't try to be all things to all people. Government has got to also understand that when someone is working hard, the more money they have in their pocket the better off the country is.

Well, it just turns out that 75 percent of the taxpayers who benefitted from the reduction of the top bracket were small business owners. So when you hear people say, we're just going to tax the rich, American citizens have got to understand, because of the way these small businesses are set up, that they pay taxes at the individual income tax rate. So when you hear "tax the rich" you're really talking about taxing mom and pop businesses. If 70 percent of the new jobs in America are created by small businesses, why would you want to take money out of their treasury? Why wouldn't you want to encourage them to thrive by letting them keep more of their hard-earned dollars?

And so I want to thank you all for your steadfast support of the American people and the American small business owner, by working to keep taxes low.

Today the Senate is debating a bill called the Warner-Lieberman bill, which would impose roughly $6 trillion of new costs on the America economy. There's a much better way to address the environment than imposing these costs on the job creators, which will ultimately have to be borne by American consumers. And I urge the Congress to be very careful about running up enormous costs for future generations of Americans.

We'll work with the Congress, but the idea of a huge spending bill fueled by taxes -- increases -- isn't the right way to proceed. And the right way for Congress to proceed on taxes in general is to send a clear message that the tax relief we passed need to be made permanent.