For Immediate Release
Office of the Press Secretary
June 2, 2008

THE PRESIDENT: Good morning. Welcome to the White House.

A week ago on Memorial Day, the flag of the United States flew in half-staff in tribute to those who fell in service to our country. Today we pay special homage to one of those heroes: Private First Class Ross Andrew McGinnis of the U.S. Army. Private McGinnis died in a combat zone in Iraq on December the 4th, 2006 -- and for his heroism that day, he now receives the Medal of Honor. 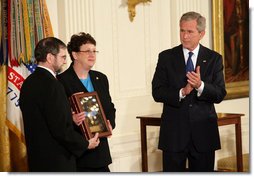 In a few moments, the military aide will read the citation, and the Medal will be accepted by Ross's mom and dad, Romayne and Tom. It's a privilege to have with us as well Becky and Katie, Ross's sisters.

I also want to thank the other distinguished guests who have joined us: Mr. Vice President; Secretary Jim Peake of Veterans Affairs; Secretary Pete Geren of the Army; Secretary Michael Wynne of the Air Force; General Jim "Hoss" Cartwright, the Vice Chairman of the Joint Chiefs. I appreciate other members of the administration for joining us.

I want to thank members of the United States Congress who have joined us today: Steve Buyer, John Peterson, Louie Gohmert. Thank you all for coming. I appreciate the Chaplain for the prayer. We welcome friends and family members of Ross, as well as members of the 1st Battalion, 26th Infantry, including Charlie Company, that's with us today.

A special welcome to the prior recipients of the Medal of Honor, whose presence here is -- means a lot to the McGinnis family. Thank you for coming.

The Medal of Honor is the nation's highest military distinction. It's given for valor beyond anything that duty could require, or a superior could command. By long tradition, it's presented by the President. For any President, doing so is a high privilege.

Before he entered our country's history, Ross McGinnis came of age in the town of Knox, Pennsylvania. Back home they remember a slender boy with a big heart and a carefree spirit. He was a regular guy. He loved playing basketball. He loved working on cars. He wasn't too wild about schoolwork. (Laughter.) He had a lot of friends and a great sense of humor. In high school and in the Army, Ross became known for his ability to do impersonations. A buddy from boot camp said that Ross was the only man there who could make the drill sergeant laugh. (Laughter.)

Most of all, those who knew Ross McGinnis recall him as a dependable friend and a really good guy. If Ross was your buddy and you needed help or you got in trouble, he'd stick with you and be the one you could count on. One of his friends told a reporter that Ross was the type "who would do anything for anybody." 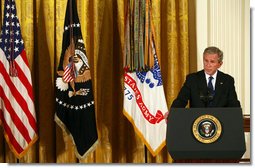 That element of his character was to make all the difference when Ross McGinnis became a soldier in the Army. One afternoon 18 months ago, Private McGinnis was part of a humvee patrol in a neighborhood of Baghdad. From his position in the gun turret, he noticed a grenade thrown directly at the vehicle. In an instant, the grenade dropped through the gunner's hatch. He shouted a warning to the four men inside. Confined in that tiny space, the soldiers had no chance of escaping the explosion. Private McGinnis could have easily jumped from the humvee and saved himself. Instead he dropped inside, put himself against the grenade, and absorbed the blast with his own body.

By that split-second decision, Private McGinnis lost his own life, and he saved his comrades. One of them was Platoon Sergeant Cedric Thomas, who said this: "He had time to jump out of the truck. He chose not to. He's a hero. He was just an awesome guy." For his actions, Private McGinnis received the Silver Star, a posthumous promotion in rank, and a swift nomination for the Medal of Honor. But it wasn't acclaim or credit that motivated him. Ross's dad has said, "I know medals never crossed his mind. He was always about friendships and relationships. He just took that to the ultimate this time."

When Ross McGinnis was in kindergarten, the teacher asked him to draw a picture of what he wanted to be when he grew up. He drew a soldier. Today our nation recognizing -- recognizes him as a soldier, and more than that -- because he did far more than his duty. In the words of one of our commanding generals, "Four men are alive because this soldier embodied our Army values and gave his life."

The day will come when the mission he served has been completed and the fighting is over, and freedom and security have prevailed. America will never forget those who came forward to bear the battle. America will always honor the name of this brave soldier who gave all for his country, and was taken to rest at age 19.

No one outside this man's family can know the true weight of their loss. But in words spoken long ago, we are told how to measure the kind of devotion that Ross McGinnis showed on his last day: "Greater love hath no man than this, that a man lay down his life for his friends." 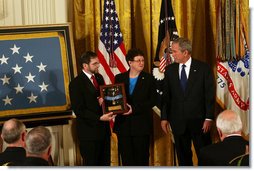 Gospel also gives this assurance: "Blessed are they that mourn, for they shall be comforted." May the deep respect of our whole nation be a comfort to the family of this fallen soldier. May God always watch over the country he served, and keep us ever grateful for the life of Ross Andrew McGinnis.

And now I'd like to invite Mr. and Mrs. McGinnis to please come forward for the presentation, and the military aide will read the citation for the Medal of Honor.

The citation is read: The President of the United States of America, authorized by act of Congress, March 3rd, 1863, has awarded in the name of Congress the Medal of Honor to Private First Class Ross A. McGinnis, United States Army, for conspicuous gallantry and intrepidity at the risk of his life above and beyond the call of duty. Private First Class Ross A. McGinnis distinguished himself by acts of gallantry and intrepidity above and beyond the call of duty while serving as an M2 .50-caliber Machine Gunner, 1st Platoon, C Company, 1st Battalion, 26th Infantry Regiment, in connection with combat operations against an armed enemy in Adhamiyah, Northeast Baghdad, Iraq, on 4 December 2006.

That afternoon his platoon was conducting combat control operations in an effort to reduce and control sectarian violence in the area. While Private McGinnis was manning the M2 .50-caliber Machine Gun, a fragmentation grenade thrown by an insurgent fell through the gunner's hatch into the vehicle. Reacting quickly, he yelled "grenade," allowing all four members of his crew to prepare for the grenade's blast. Then, rather than leaping from the gunner's hatch to safety, Private McGinnis made the courageous decision to protect his crew. In a selfless act of bravery, in which he was mortally wounded, Private McGinnis covered the live grenade, pinning it between his body and the vehicle and absorbing most of the explosion.

Private McGinnis' gallant action directly saved four men from certain serious injury or death. Private First Class McGinnis' extraordinary heroism and selflessness at the cost of his own life, above and beyond the call of duty, are in keeping with the highest traditions of the military service and reflect great credit upon himself, his unit, and the United States Army.

(The Medal of Honor is presented.) (Applause.)