MRS. BUSH: Thank you very much, Lydia, and congratulations on your plans to play soccer at Auburn. (Applause.)

Thanks to all of you for your very warm welcome, and for inviting me here today. President Bush was truly inspired by your community's strength and compassion during his visit last year, and he wanted me to give you his very best wishes. (Applause.) 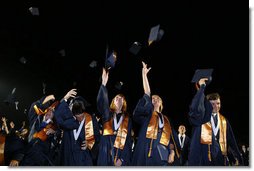 And now, of course, I especially want to recognize the Enterprise High School Class of 2008. (Applause.)

This class has had a long journey to get here. While other students in other parts of the country were worried about finding dates for dances, you were sorting through the rubble of a demolished school building. And while your peers were watching reruns of Dawson's Creek, you were mourning the loss of eight classmates, including four -- Michael, P.J., A.J., and Ryan -- who would have graduated with you today.

The class we now honor responded to these tragedies with strength and dignity that far outshone your years. You worked together to accomplish something extraordinary: the establishment of a school without a building.

This class was the first to spend an entire year on the campus of Enterprise-Ozark Community College. You crowded into 40 portable buildings in lieu of brick-and-mortar classrooms. You pushed through seven long "power days" to catch up at the beginning of last semester. And you juggled extracurricular activities haphazardly, as time and space allowed.

Some changes caused by the move were welcomed -- evidently there were no complaints about sleeping in for 11:00 a.m. classes. (Laughter.) But the hardest challenge this class faced was creating a normal high school.

Any doubts that this year's seniors were up to the task went to rest here in "The Hole," at the first football game of the season. I'm from Texas, so I understand that this would be a big event in any year. But this year it was really special. Enterprise students were back in their old stadium for the first game since the storm. It seemed that the whole town was here. And when the Wildcats came running in to open the season, everyone went wild. The Wildcats won that night, and they went on to deliver victories against Northview, Dothan, and others.

But these achievements only scratch the surface of your class's true success: how you have come through last year's tragedy to bring positive change. As you've recovered from your losses, members of this class have played bingo with nursing home residents; you've collected donations for Habitat for Humanity; you took part in two new service organizations, like the Dream Organization, which pairs high school role models with elementary school students.

Staff at the White House asked me to express their appreciation to the Encores, who performed in the East Room of the White House last month. This group showed great bravery last year by winning the National Show Choir Championship just weeks after losing three singers. Our guests at the White House were thrilled with the Encores' performance. And White House staff is still talking about their remarkable attitude of thankfulness -- even after such a hard loss.

We celebrate all of these achievements today. And we recognize that they were not accomplished alone. Members of the Class of 2008: Today, your time at Enterprise ends in the same place where that first football game marked a senior year of moving forward. Graduating in the stadium is a cherished tradition. Many of your mothers and fathers and brothers and sisters and teachers received their diplomas in this stadium.

As you graduate tonight, take with you memories of your teachers' and classmates' support after the storm, the blue and white worn by students at rival schools, and the donations that came pouring in from around the country. Take with you memories of the great sacrifices your teachers made to create a positive learning environment, and how your families supported you in these very difficult times. Use these memories as inspiration to move forward with the same great dignity you have used and shown since last year's storm. 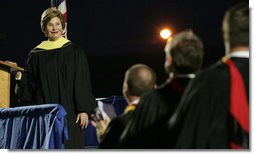 America will be made a better place because of the lessons you've learned as Enterprise Wildcats, and then taught the rest of our country by your good example.

Congratulations to the Enterprise High School Class of 2008. And may God bless you. (Applause.)